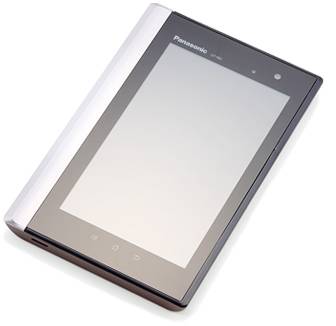 A few weeks ago Panasonic started showing off a new Japanese Android tablet that it’s positioning as a multimedia device with access to digital media stores for eBooks and other content. Now we have information on the pricing and release date. The tablet also has a name.

The Panasonic Raboo will launch in Japan on August 12th for around $450. It’s unlikely to show up in the US anytime soon.

The Raboo device will support the Rakuten book store in Japan with about 10,000 eBook titles available for purchase. What the tablet won’t have is support for the official Google Andorid Market.

The tablet can support 1080p HD video playback, but it doesn’t have an HD display or feature HDMI output, so the only real advantage is that you can watch HD videos on the device without transcoding them to a lower resolution format first.