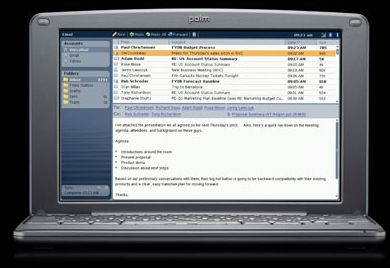 Palm almost anticipated the netbook revolution with the Palm Foleo. I say almost for two reasons. First, because while the Palm Foleo was a small clamshell device with a keyboard, it wasn’t a standalone computer. Instead, it was designed to connect to a Palm mobile phone and act as an external display and full QWERTY keyboard for interacting with your data and surfing the web. And second, because the Foleo never made it to market. Palm introduced the concept and then killed it off in 2007 — just before Asus introduced the first Eee PC netbook.

But now there’s a rumor going around that Palm could revive the Foleo, this time as a standalone device running WebOS, the same operating system that the upcoming Palm Pre smartphone will use.

If there’s any merit to the rumor, the new device would look a lot like the original Foleo concept, but the software would be different. The device would still use an ARM processor, which means it wouldn’t be capable of running Windows, but I imagine hackers who didn’t like the WebOS operating system could figure out a way to make the hardware run Linux. But you might not want to. While WebOS won’t be able to handle Linux apps like OpenOffice.org or Firefox right off the bat, the operating system is designed to be light weight and easy on battery life. A standalone Palm Foleo could get somewhere around 8 hours of run time on a single charge.

13 replies on “Palm could revive the Foleo as a netbook”