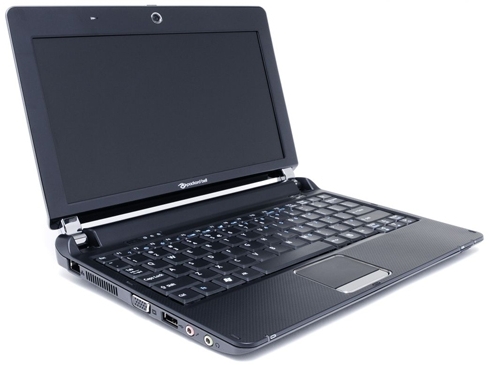 The reports of the Packard Bell Dot netbook’s death appear to have been mildly exaggerated. I reported back in March that Packard Bell was pulling the plug on its 8.9 inch version of the Dot, a netbook which is little more than a rebranded Acer Aspire One anyway (Acer owns the Packard Bell brand). But Notebook Italia is reporting that the Dot has been reborn, in the form of two new laptops.

The Packard Bell Dot S has a 10.1 inch display and the Dot M has an 11.6 inch. 1366 x 768 pixel screen. They’ll come with WiFi, Bluetooth, and 3G options and multitouch trackpads. The rest of the specs are pretty much par for the netbook course, with 1GB of RAM, 160GB hard drives, webcams, and 5-in-1 flash memory card readers. The Dot M will have a 1.33GHz Intel Atom Z520 CPU instead of the more common 1.6GHz Intel Atom N270 processor. This CPU should offer better battery life, but marginally slower performance.

The notebooks look a lot like recently announced laptops from Acer. But I have to wonder, can you get away with calling an 11.6 inch laptop “Dot?” I mean, the name works for an 8.9 inch netbook, but Packard Bell is sort of pushing the boundaries of netbookdom here.

According to Notebook Italia, the Dot S will run 299 Euros and should hit the streets in some areas this week. The Dot M will be availale later in April for 399 Euros.