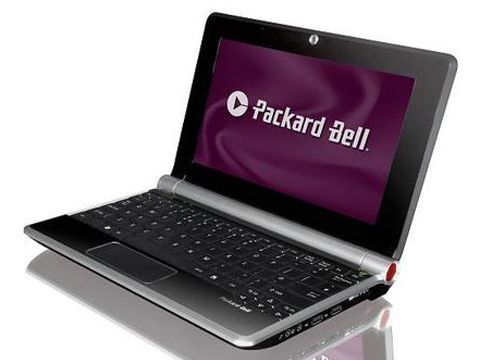 Packard Bell’s Dot netbook, which bears a striking resemblance to the Acer Aspire One (which makes sense since Acer owns Packard Bell) is popping up throughout Europe. Trusted Reviews notes that the Dot will be available in the UK in January for £299. Meanwhile, Blogeee reports that the Dot is already listed at French retailer Darty’s web site for 379 Euros.

Apparently the Dot isn’t just limited to Europe though. Chilean web site Tecnoblog has posted a brief review of the netbook, which it says will be available in Chile in a few days.

The Packard Bell Dot has the same basic chassis, keyboard, and overall layout as the Acer Aspire One. It is painted a different color and it has the Packard Bell logo instead of the Acer logo. But that’s about it for the differences. Both netbooks have 8.9 inch, 1024 x 600 pixel displays, 1.6GHz Intel Atom CPUs, 1GB of RAM, a multi-format card reader, 802.11b/g WiFi, 3 USB ports, and a 3 cell battery with an optional 6 cell version available. The Packard Bell Dot does seem to come with a 160GB hard drive standard, while the Aspire One comes with a variety of solid state disk and hard drive options. And like the Aspire One, the Dot can be configured with a 3G modem.