The makers of the OnePlus One smartphone have released a software update that brings Android 5.0 Lollipop to the phone which has earned a reputation as an affordable, high-quality phone that’s kind of hard to actually buy.

The new software is also the first official release of OxygenOS, which is the name of the custom version of Android developed by OnePlus and its new team of developers, drawn from the makers of the Paranoid Android custom ROM. 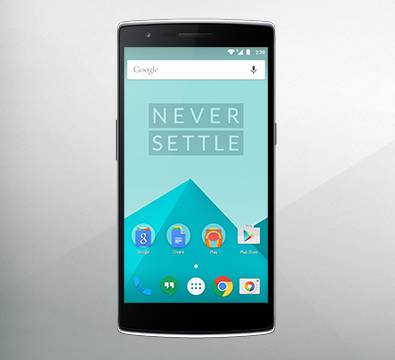 OxygenOS is based on Android 5.0.2 Lollipop and for the most part it looks like the stock version of Android you’d see on a Google Nexus device. But it does have a few special features and OnePlus promises more are on the way.

For instance, there’s support for gestures including double-tapping the screen to wake the device when the display is off, drawing an O on the screen to launch the camera, or drawing a V to toggle the flashlight. You can also skip tracks during media playback by drawing a < or > symbol with two fingers.

The Quick Settings panel is also customizable, allowing you to move tiles by dragging-and dropping.

The OnePlus One smartphone features a 5.5 inch, 1920 x 1080 pixel display, a Qualcomm Snapdragon 801 processor, 3GB of RAM, and 16GB or 64GB of storage. It sells for $299 and up, but buying one requires an invitation unless you order on a Tuesday… and either way you may have to wait a while for your phone to be delivered.

When the OnePlus One first launched in 2014, one of the key features of the smartphone was that it was one of the first phones to run custom software developed by Cyanogen Inc.

While you can still run Cyanogen OS on the phone and an Android 5.0 version is expected soon, the relationship between the two companies has soured a bit and while Cyanogen has announced partnerships with new companies including BLU, Alcatel OneTouch, and Qualcomm, OnePlus is clearly not putting all of its software eggs in one basket anymore.

9 replies on “OxygenOS brings Android 5.0 to the OnePlus One smartphone”