The HP TouchPad tablet has a 1.2 Ghz Qualcomm Snapdragon dual core processor. But if that’s not fast enough for you, it turns out the chip can easily support higher clock speeds. 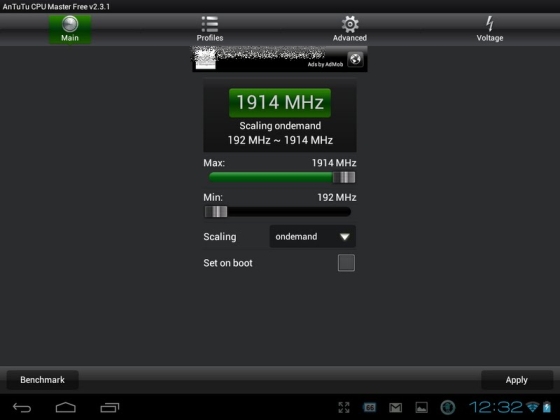 HP originally shipped the tablet with webOS software, and webOS hackers have built custom kernels that allow you to set the CPU speed as high as 1.7 GHz. But the TouchPad has also proven popular with folks looking to install Android on the 9.7 inch tablet.

If you install the latest version of CyanogenMod 9 for the TouchPad based on Google Android 4.0 you should be able to overclock the tablet using a variety of tools such as SetCPU, System Tuner, AnTuTu CPU Master, or ROM Toolbox — they’re all available from the Android Market.

Any of these tools should let you set the tablet’s top speed as high as 1.7 GHz. But if you want to go even further, xda-developers forum member show-p1984 has put together a custom kernel for the TouchPad called Bricked-Kernel.

You can install the custom Kernel using ClockworkMod recovery or adb. Once you’ve done that you should be able to set your CPU speed as high as 1914 MHz (or about 1.9 GHz).

The kernel also sets the default  speed at 1566 MHz.

All speeds higher than 1782 MHz are considered unstable, so you might not actually want to go that far if you don’t want to cause problems with your tablet. But there are other reasons to try the Bricked-Kernel on the TouchPad beside the ability to go above 1.7 GHz. The kernel is also designed to improve the tablet’s boot speed, offer better performance, and disable the GPU when the screen is off to help prolong battery life.