Oval Elephant has been selling MK802 mini PC devices and accessories for a few weeks (and apparently using a photograph I snapped to do so). Now the company is preparing to launch its own Mini PC called the Oval Elephant.

The Oval Elephant Mini PC will have the same basic hardware as an MK802 including an Allwinner A10 processor, Mali 400 graphics, 1GB of RAM, 4GB of storage, and 802.11b/g/n WiFi.

But the Oval Elephant has a few things that set it apart including a full-sized HDMI port that lets you plug the PC straight into an HDTV or monitor, a built-in mic, and a mic port. 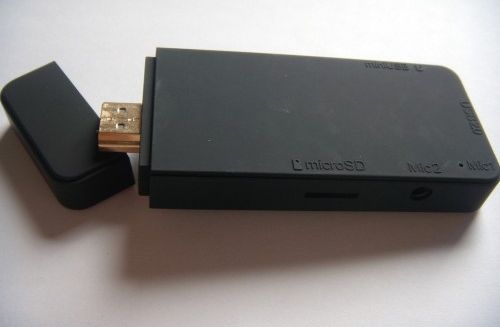 The company also offers a choice of accessories including a wireless air mouse or a wireless remote with a built-in QWERTY keyboard.

Oval Elephant expects the first shipment of the devices to come July 3rd with more on the way a few weeks later. Right now they’re available for pre-order for $71.49, but if more than a thousand people place orders the price will fall to $68 per unit.

The folks behind Oval Elephant seem to be interested in enabling support for a range of software and operating systems. Out of the box the Oval Elephant Mini PC will run Google Android 4.0, but the company selling the device plans to port Linaro, XBMC, and other software to work with the Mini PC.

The Oval Elephant Mini PC appears to be based on the same design as the Smallart Uhost, a tiny, hackable PC. But the Uhost is more expensive, running about $99 at AliExpress.

Right now I’m not aware of any Allwinner A10 devices that can run XBMC, but some of the developers behind the popular media center software are working on porting it to run on devices such as the Oval Elephant Mini PC — and the founder of OvalElephant seems to be working to ensure the mini computer is compatible with the software.

Update: Some early customers are complaining that the included power supply doesn’t provide enough energy for the Mini PC. Oval Elephant’s current response is to stop shipping the power supply, instead including just a USB cable.

But since the Mini PC needs 10W of power, you may not get enough power by plugging the device into a USB 2.0 port on a PC. You’ll probably need a USB 3.0 port, or you may need to buy a USB iPad power adapter or similar device 5v 2A device.