The Ouya is an inexpensive game console with the guts of a cheap Android phone or tablet. But unlike most Android devices, the Ouya doesn’t have a display or touchscreen — it’s meant to be plugged into your TV and used with a wireless remote control.

But one hacker decided to make the Ouya a bit more portable, by taking it apart and putting it back together with a touchscreen display and game controller to handheld game console. 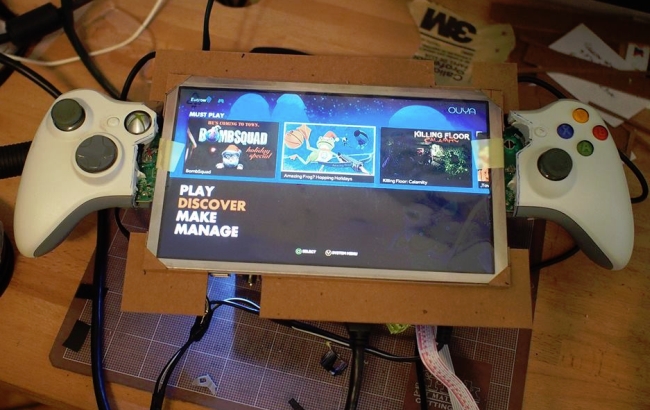 There are certainly cheaper, easier ways to get your hands on a portable game console. You could buy an NVIDIA Shield, Archos GamePad, or another device that already combines a physical controller, touchscreen, and Android software. Or you could just pick up one of the many phones or tablets which have faster processors than an Ouya.

But that doesn’t make this project any less cool from a technical standpoint. Essentially, OuyaBoards member eucrow is taking a device that’s meant for use in the living room and transforming it into something that can be used on the go.

The project is still a work in progress, but currently involves a cannibalized Xbox 360 controller, an Ouya, and a fair amount of wiring and what looks like particle board.

You can follow the progress at the Specialization is Overrated Facebook page, where you can also find more photos.

The Ouya game system features an NVIDIA Tegra 3 ARM Cortex-A( quad-core processor, 1GB of RAM, 8GB of storage, WiFi, Bluetooth, Ethernet, and a wireless game controller. It runs an Android-based operating system and it’s designed to play games from the Ouya store, all of which offer some sort of free-to-play option.

2 replies on “Ouya returns to its roots: Hacked to become a handheld game system”