Ouya plans to launch a $99 video game console running Android early next year. It features an NVIDIA Tegra 3 quad-core processor, 1GB of RAM, 8GB of storage, and a wireless remote control. The project has raised more than $5 million from investors including developers and customers interested in pre-ordering a game console.

But some folks have expressed skepticism about the project. The Ouya console won’t be as powerful as an Xbox or Playstation, and it won’t even include access to the Google Play Store, which means that the only games available will be Android games that developers submit through the Ouya Shop (or which users sideload onto the device).

Now the Ouya team has made an announcement which definitely helps justify the game console’s $99 price tag. 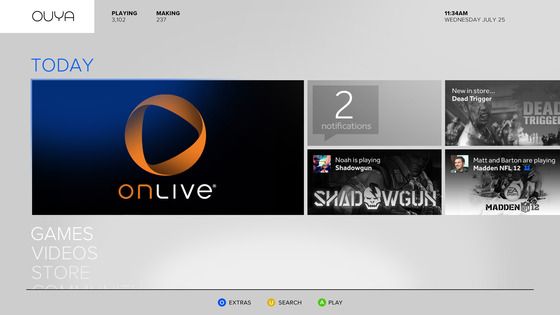 The Ouya console will support the OnLive internet gaming service. OnLive lets you stream console-quality games over the internet. You can sign up for a Netflix-like monthly subscription and play any of the available games in OnLive’s catalog, or pay to purchased the rights to play a particular game as much as you’d like.

Since the games are actually running on remote servers, all you need to play is a device with a fast internet connection and the ability to run the OnLive app.

OnLive sells its own game system which consists of a set-top-box and a wireless remote control. But it costs $99.99 — a buck more than an Ouya. And its only use is to access OnLive games, while Ouya’s device will let users stream games from OnLive, play games from the Ouya Shop, or perform many other activities — one of the key selling points is that the Ouya will be hacker and developer-friendly. Rooting the device doesn’t void your warranty.

So even if you don’t use the Ouya console for anything but accessing OnLive, it’s a pretty good deal at less than $100. If you plan to use it for more, it’s an even better deal — even if game developers don’t flock to the platform.