Before the Apple iPad was announced, a lot of people thought Apple’s tablet would look like a Mac… in slate form. That’s probably because up until that point, most tablet computers were Windows machines which ran a variation of the desktop Windows operating system.

Instead, the iPad ran a version of iOS — the operating system designed for the iPhone and iPod touch. Apple took an operating system that had been designed from the ground up and stuck it on a tablet and the company’s been selling boatloads of iPads ever since.

Apple released the developer preview of OS X 10.8 Mountain Lion today. The public release is scheduled for this summer.

It’s still a desktop operating system designed for keyboard and mouse (or touchpad) input. But Apple is adding a lot of iOS features to OS X, including:

Apple has also renamed some apps, so that iCal, for instance is now just called Calendar.

While it’s nice to see some visual consistency between iOS and OS X apps, some of the features look unnecessarily cartoonish and touch-friendly for a desktop operating system. 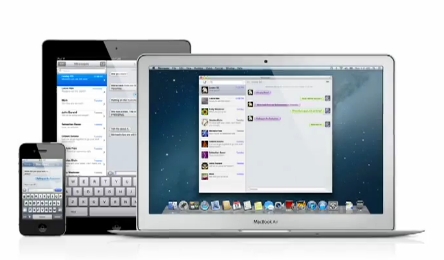 For instance, it’s nice to be able to use Messages to start a chat with a friend whether you’re using a phone or tablet — but the speech bubble user interface looks kind of childish and seems to waste space on a larger screen.

Out of the box, Mountain Lion will only let you install third party apps if they are either download from the Mac App Store or come from an “identified developer.”

You can check a box if you want to remove that restriction and install apps from any developer, but the benefits of sticking with the closed system is that there’s a better chance that you won’t be installing any apps containing malware.

That’s because Apple reviews every app submitted to the Mac App Store, and while developers can sign up for a security certificate from Apple, the company can revoke that certificate if a developer causes trouble.

So Mountain Lion isn’t locked down as tightly as iOS, which only officially supports apps downloaded from the App Store. And this really should lead to tighter security… but I can see some users and developers crying foul, which is probably why Apple included an option to disable these security checks altogether.