Amazon launched its first tablet in 2011. The original Amazon Kindle Fire looks a bit dated by today’s standards: It has just 512MB of RAM, 8GB of storage, a TI OMAP 4430 dual-core processors, and a 7 inch, 1024 x 600 pixel display. But it’s still a surprisingly capable tablet.

Amazon still releases firmware updates for the Kindle Fire from time to time, but the company hasn’t brought the latest features from Fire OS 4 to its first tablet.

Independent developers, on the other hand, have been creating custom ROMs for the Kindle Fire for years — and now you can even run Android 5.0 Lollipop on the tablet. 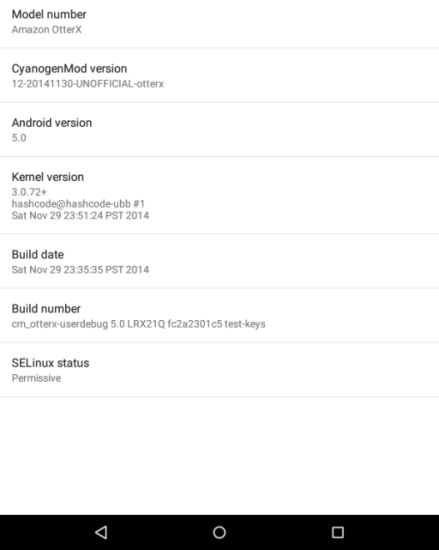 Installing Android 5.0 takes a bit of work. If you have a Kindle Fire running firmware version 6.3.3, you’ll want to check out sd_shadow’s instructions for rooting the tablet and flashing custom ROMs, bootloaders, and recoveries.

Then you’ll want to use Hashcode’s Project OtterX instructions for replacing all of Amazon’s firmware and changing the partitioning scheme. You’ll need to do that even if you’re already running a custom ROM, since the next step requires OtterX.

Finally, you’re ready to install Hashcode’s build of CyanogenMod 12 based on Android 5.0 Lollipop.

We may see more custom ROMs based on Android 5.0 in the future, but Hashcode has been working on Kindle Fire development for years and knows what he’s doing. That said, as of early December, 2014 his build of CyanogenMod 12 is still an early alpha release which may have a few bugs.

For instance, battery drain can be kind of high, some transparency effects are disabled to deal with the small amount of RAM on the Kindle Fire, and Google Play Movies won’t work. But audio, WiFi, and hardware-accelerated audio and video should work.

Replacing Amazon’s software means that you can install and use the Google Play Store instead of the Amazon Appstore (although you can still install that if you’d like). You also get the stock Android experience instead of the Kindle Fire “shelf” style user interface. Android 5.0 brings new features including support for notifications on the lock screen, a new recent apps menu, and a redesigned Quick Settings panel.

While I wouldn’t necessarily recommend picking up a Kindle Fire tablet in 2014, used and refurbished models often sell for under $100.

Mostly, I’m just continually impressed to see independent developers continue to support older devices that have largely been largely abandoned by their manufacturers. This is why I always prefer to buy hardware that has an unlockable bootloader whenever possible.

One reply on “Original Amazon Kindle Fire gets Android 5.0 (unofficially)”