A $35 Raspberry Pi single-board computer is good at a lot of things… considering its small size, low power consumption, and inexpensive price tag.

But you know what’s even better than a single Raspberry Pi? More than a thousand of them packed into a giant cluster to create a supercomputer.

Well… I guess it’s only better depending on what you plan to do with it. But it’s definitely an interesting application. Anyway, useful or not, Oracle is showing off what it calls a Raspberry Pi Super Computer at the Oracle Code One area at the company’s Oracle OpenWorld conference. 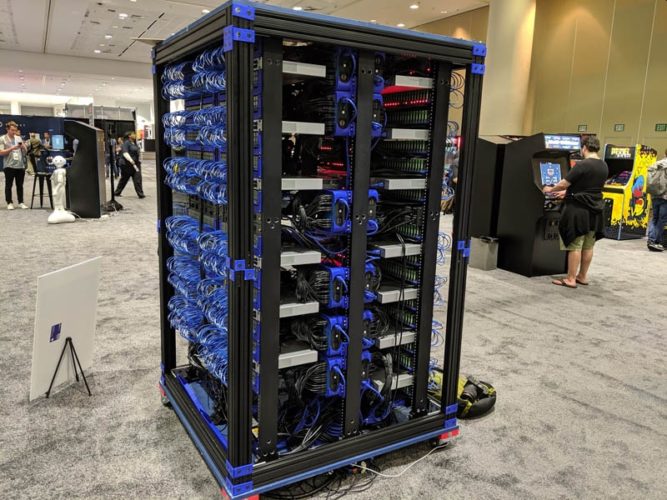 According to Oracle, the computer includes 49 3D-printed Raspberry Pi holders, five racks, 22 network switches, 18 USB power supplies, a whole lot of network and power cables, and 1024 Raspberry Pis in a box inspired by a certain British Police Box that may or may not be bigger on the inside.

The folks at ServeTheHome got a chance to see the Raspberry Pi Super Computer in person and report that it actually has 1060 Raspberry Pi 3 Model B+ mini computers, and the case doesn’t look all that much like a machine designed for navigating Time and Relative Dimension in Space.

So it’s probably not bigger on the inside than the outside.

The system is running Oracle Autonomous Linux and in addition to the cluster of Raspberry Pi computers, there’s a single Supermicro 1U Xeon storage server.

Is this the most practical way to build a supercomputer? Probably not. Is it the most powerful? Certainly not. And is it feasible for a DIY build project? Maybe… if you want to shell out $37,100 to buy 1,060 tiny computers at $35 each, not to mention all the other parts you’d need to make your own Raspberry Pi Super Computer.

But it’s still a rather impressive demonstration of the concept of a sum being greater than its parts.

You can find more details and additional photos at ServeTheHome.

8 replies on “Oracle built a supercomputer from 1000+ Raspberry Pis”