Now that the patents for the popular MP3 audio codec have expired, it’s unlikely that the format is going anywhere, despite many reports that misinterpreted what the end of the format’s licensing program would mean.

MP3 was the de facto standard for folks who wanted to rip music from CDs in the late 90s and early ’00s, as well as for those who shared music via Napster and other peer-to-peer networks. It’s still the most popular format for distributing podcasts.

But it’s not necessarily the most efficient way to compress audio. AAC offers better quality at lower file sizes. FLAC offers lossless audio at larger file sizes (that are still smaller than uncompressed audio). And Ogg Vorbis is an open source (but not as popular) alternative.

A few years ago a new player hit the scene: Opus is a free and open source audio codec that’s available royalty-free. Like AAC, it’s more efficient than MP3. And as of last week, it sounds way better at much smaller bit rates than it used to. 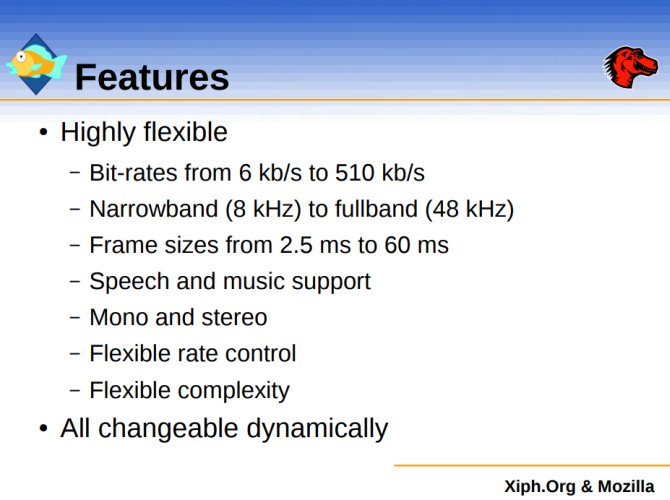 Opus 1.2 is the latest version of the audio codec, and it includes improved speech quality for recordings that use as little as 12-20 kb/s and improved music encoding for files that use 32-48 kb/s. It also includes improvements to variable bitrate encoding, bug fixes, and other enhancements.

In practical terms, here’s what’s that means. You can now encode stereo music at 32 kilobits per second, rather than just using that setting for mono files. And they sound good.

You can listen to the samples on the Opus 1.2 demo page, and to my ear, some audio encoded at 32 kb/s with the Opus 1.2 codec sounds better than 64 kb/s MP3 audio. The differences are harder to hear at higher bit rates though.

Improved audio quality at low bit rates means you could save space on your phone, computer, or MP3 player… although odds are if you’re using local storage you’d still be better offer going for a higher bit-rate which will sound better still. But it also means that you can stream audio at higher quality without using more bandwidth. Or you could stream audio at the same quality as before while using less bandwidth.

Opus is a relatively young audio codec, so support may not be built into as many hardware or software-based audio players. But as Mozilla’s Jean-Marc Valin notes, it’s the default audio codec for WebRTC, which means that if you’re using a web-based voice or video chat application to communicate with someone over the internet, there’s a decent chance you’ll either notice improved audio quality, reduced bandwidth use, or both.