Remember when Chinese phone makers had a habit of cloning iPhones and slapping their own Android-based software on them? That doesn’t happen quite as much as it used to. But Oppo is reviving the practice… for watches.

The company’s first smartwatch looks like a very nice device for a reasonable price. But the Oppo Watch also looks like a straight-up Apple Watch clone — with a few key differences. 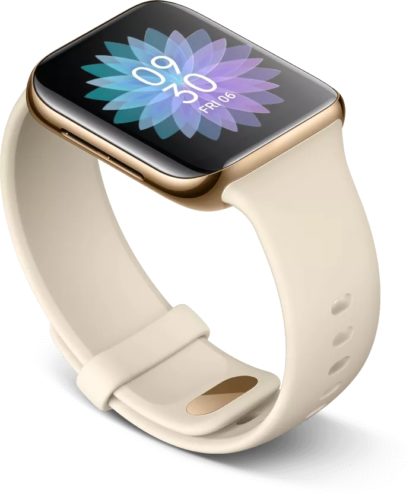 First, instead of a “Digital Crown” on the right side, the Oppo Watch navigation and function buttons.

Second prices for an Oppo Watch start at about $215 in China (which is where the watch will be sold exclusively at launch). The Apple Watch Series 5, by comparison, has a starting price of $399.

Third, and perhaps most importantly, the Oppo Watch doesn’t run Apple’s watchOS. It doesn’t even use Google’s Wear OS. Instead it ships with Oppo’s Android-based operating system called ColorOS (which the company also uses for phones, but the watch version has an Apple Watch-like user interface).

The Oppo Watch comes in two sizes, which means customers can opt for a model with:

Both versions have a magnetic charger and support for VOOC Flash charging — Oppo says it takes 15 minutes to get a 46-percent charge, or 75 minutes for a full charge.

In terms of hardware, the watch features a Qualcomm Snapdragon 2500 processor, 1GB of RAM, 8GB of storage, WiFi, Bluetooth, NFC, and support for 3G and 4G LTE networks. And there’s a microphone and support for Oppo’s Breeno voice assistant.

It also supports motion tracking and has an optical heart rate sensor and ambient light sensor. It’s waterproof and comes in an optional stainless steel edition that features a sapphire crystal covered display.

via The Verge, Engadget, and Thurrott