Chinese phone maker Oppo unveiled its new 65 watt fast-charging technology last month. Now the company is launching the first phone to make use of it.

The Oppo Reno Ace is a smartphone with flagship specs including a 90 Hz display, a Qualcomm Snapdragon 855+ processor, four rear cameras, and at least 8GB of RAM and 128GB of storage.

But its most unusual feature is the support for SuperVOOC 2.0 fast charging, which Oppo says will let you fully charge the phone’s 4,000 mAh battery by plugging in 30 minutes. 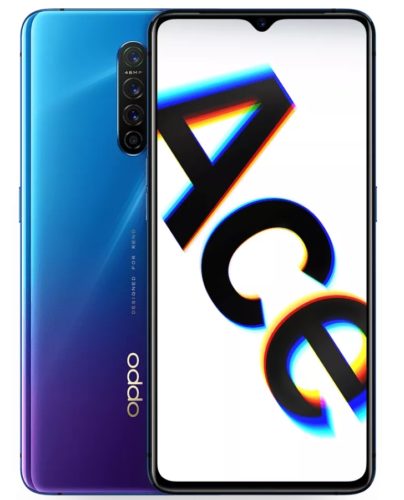 Don’t need a full charge? Oppo says a 5 minute charge will take a battery from 0 to 27 percent.

And if you don’t have a SuperVOOC charger around, the phone also supports USB Power Delivery and Qualcomm Quick Charge, which means you should get fast (but less fast) charging using any number of third-party chargers.

Other features of the Oppo Reno Ace include a include a 6.5 inch, 2400 x 1080 AMOLED display with support for up to 700 nits of brightness, stereo speakers, a 3.5mm headphone jack, and NFC support.

There’s a waterdrop-style notch in the display for a 16MP front-facing camera, and the phone has an in-display fingerprint sensor.

And on the back of the phone, there are four cameras:

Oppo says the telephoto camera offers “5X hybrid zoom,” but I haven’t seen details on how far you can zoom in using just optical zoom.

The phone will come in three prices/configurations in China at launch:

There’s also a limited edition 40th-anniversary Gundam Edition model with a Gundam-themed color scheme and accessories. It has 8GB of RAM, 256GB of storage, and a $505-ish price tag.