The Oppo N1 isn’t just the first phone to ship with CyanogenMod pre-loaded, it’s also the first device running CyanogenMod’s custom version of Android to get Google Certification. That means Google’s given the go-ahead for the Oppo N1 to come pre-loaded with the Google Play Store, Gmail, Google Maps, and other Google apps.

Up until now if you’ve wanted to run CyanogenMod on your Android phone or tablet, you’ve had to download and install the operating system and Google apps separately. 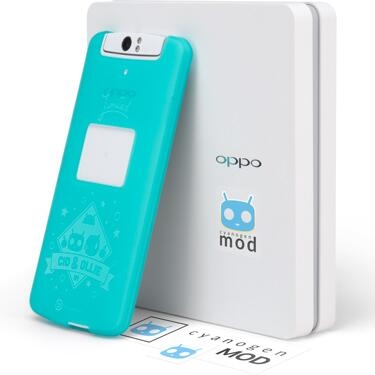 Oppo says the new model will be available starting December 24th, 2013 and you’ll be able to find out where to buy one at the Oppo website.

The Oppo N1 smartphone sports a 5.9 inch full HD display, a Qualcomm Snapdragon 600 quad-core processor, 2GB of RAM, up to 32GB of storage, and a 13MP camera with a hinge that lets you point the camera toward the back or front of the phone. It sells for $599 and up.

The phone is available with a choice of CyanogenMod software or Oppo’s own custom version of Android, called Color OS.

CyanogenMod is based on the Android Open Source Project, and features a number of custom apps and tweaks to features such as the quick settings panel and shutdown menu. CyanogenMod Inc also launched a few new services this year, including a secure messaging platform, and a secure service for finding or remotely wiping missing phones.

In order to gain Google certification and ship a phone with Google apps pre-loaded, the CyanogenMod team made one departure from its normal mode of operation with the Oppo N1: The phone isn’t rooted. But users will be able to root their phones themselves if they want extra control over their devices.