For months, LG has been teasing its LG Rollable smartphone with a screen that expands to give you a tablet-sized device at the touch of a button. But LG’s smartphone business has been underperforming, and it’s unclear at this point whether the phone will ever see the light of day.

But rollable smartphone technology? It’s not exclusive to LG.

Chinese phone maker Oppo is also developing a phone with an expandable display, and French blogger Brandon Le Proktor has posted a hands-on video with a prototype of the Oppo X 2021 concept device, and it looks pretty remarkable in action. 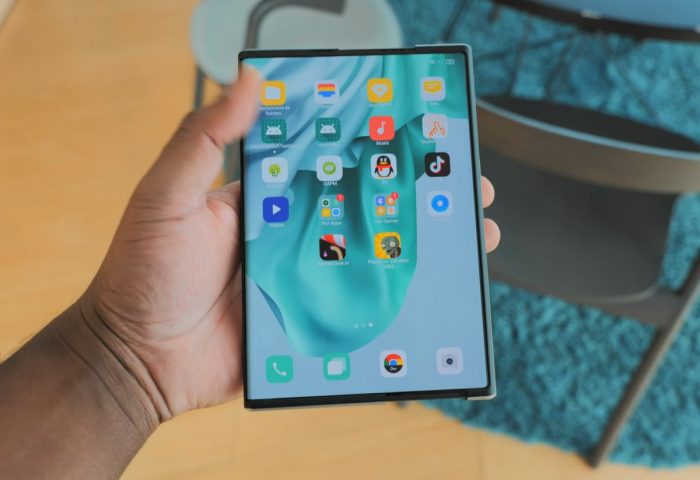 Here’s the basic idea: At first glance, Oppo’s smartphone has a 6.7 inch plastic OLED display. But the screen is actually a flexible OLED display with part of the screen rolled up and hidden inside the phone’s case. Press a button and the phone expands, the screen unrolls, and you find yourself holding a 7.4 inch tablet.

While that may not sound much bigger, the 6.7 inch screen is narrower. If I had to guess, I’d say the device has something like a 21:9 aspect ratio display in phone mode and a 4:3 or 3:2 screen in tablet mode.

That means that, like a Samsung Galaxy Z Fold 2, Microsoft Surface Duo, or other foldable phones, you can choose between a smaller, narrower screen or a larger, wider one depending on your use case. But you don’t have to worry about a seam down the middle of the phone and there’s no need for a secondary cover display.

Le Proktor notes that at almost half a pound, the phone is on the heavy side. But it’s still reasonably lightweight by tablet standards. And unlike a typical tablet, you can reduce the size of this device so that it easily fits in your pocket.

I have no idea how you’d fit it in a case though, unless case makers start producing flexible cases and/or cases that are designed to let you easily pop the device in and out. I’m pretty sure you’ll never be able to use a screen protector with this phone though.

Other details I picked up from the video:

Oppo hasn’t officially revealed specs for its demo phone, and there’s no word on how much it will cost, but smart money is on the answer being ” a lot.”

5 replies on “Oppo has a rollable smartphone too, and here’s what it looks like in action”