About two months after releasing the first developer channel build of the Opera web browser to feature a built-in ad blocker, Opera is bringing its ad blocker to everyone. And by everyone, I mean everyone using the company’s desktop web browser or the Opera Mini browser for Android. 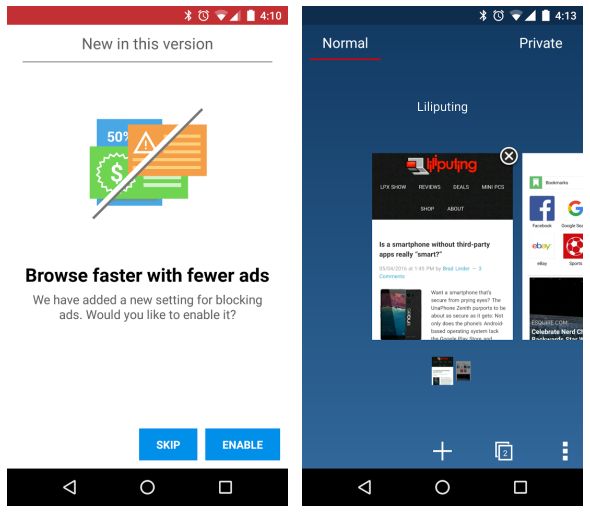 Opera already supported ad blocking thanks to its support for third-party extensions. But the company says the ad blocker built into the browser is faster and more efficient than third-party solutions, allowing you to load web pages more quickly and save more internet bandwidth.

The ad blocker is disabled by default, but you can turn it on with a single click. You can always disable it for specific sites if the blocker causes problems when trying to load content on those pages, or if you’re cool with seeing ads on some websites but not others.

When I spoke with Opera founder Jon von Tetzchner, who is no longer with the company, he expressed surprise that a company which makes much of its money through advertising would implement this kind of feature. But Opera published a blog post this week saying that the company is basically taking the consumer-friendly stance on ad blocking, since using ad blockers can help protect privacy and security while leading to a faster web.

It’s hard to argue with that… although it does raise the question of how the web would be funded if the majority of users were blocking ads.

Now might be a good time to mention that I just launched a Patreon campaign for Liliputing and the LPX Show. If you’re a regular reader and you use ad blocking software, you might want to consider making a contribution to help support the sites.

Now back to our regularly scheduled article about Opera.

The company may have killed off a number of features a few years ago when the browser switched from using its own Presto rendering engine to using Google’s Blink engine (which is a fork of Webkit). But the addition of features like a native ad blocker and a built-in VPN show that the company is still looking for new ways to differentiate its software from Chrome, Firefox, and other browsers.