It’s no secret that many websites would load much more quickly if they didn’t display ads… and many people are also wary of having their data tracked by the companies that serve up those ads.

So there’s a growing cottage industry of ad blocking software for desktop and mobile web browsers. Usually if you want to use an ad blocker, you need to install it manually. But Opera has decided to go all out and build one into the latest version of the company’s desktop web browser.

If you install the latest developer channel build of Opera, you can turn on ad-blocking from the settings menu. 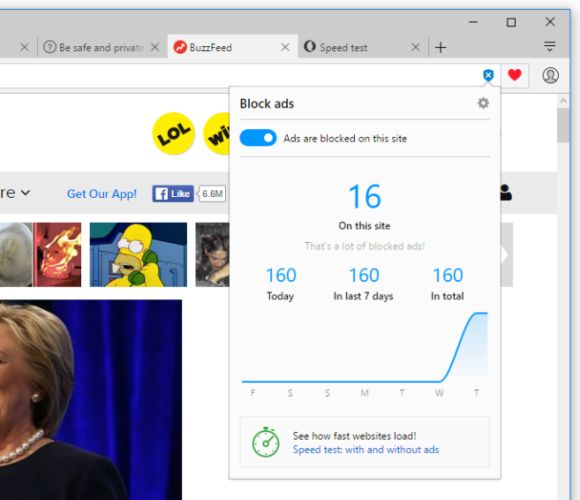 The blocker is integrated into the browser in a couple of nifty ways. If you visit a website that doesn’t display properly with ad blocking enabled (or one you want to support by disabling your ad blocker *hint* *hint*) you can just tap the little blue block icon in the location bar and slide the toggle to turn off the blocker.

You can also see how many ads are currently blocked and click an icon to run a speed test to see how much faster the site loads without ads. 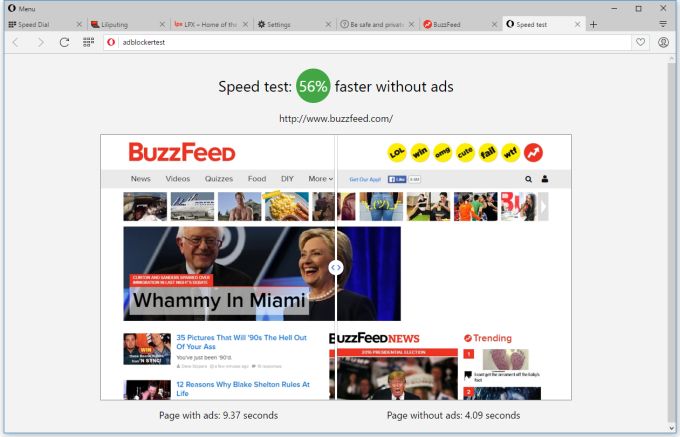 Anyway, Opera claims its new browser with an integrated ad blocker can render pages more quickly than Chrome or Firefox using a plugin.

Note that Opera might overstate how many “ads” are blocked on a page because the technology also stops scripts like Google Analytics from running. Liliputing rarely shows more than 7 ad units on a page, from just a handful of ad networks, for example. But Opera (and other ad-blocking software like Ghostery) will show a much higher count. I do acknowledge that the site loads more quickly with ad blocking enabled though.

Unfortunately web publishers face a dilemma at the moment: advertising pays for much of the content on the web, but it also makes the experience of surfing the web a bit more painful.

A handful of big news organizations like The New York Times and Wall Street Journal can make money by charging subscriptions, but it’d be hard for independent bloggers like me to make a living if I relied on donations from the small percentage of readers that might be willing to make them.

Interestingly, it seems that makers of ad blocking software are well aware of this: Adblock Plus has been both praised and criticized for working with advertisers on an “acceptable ads” program. And I couldn’t help but notice that Opera includes a number of big-name news sites in its whitelist out of the box, including CNET, BuzzFeed, and Bloomberg, even though the browser’s own testing tools show some of those sites would load more than twice as quickly without ads and other scripts.