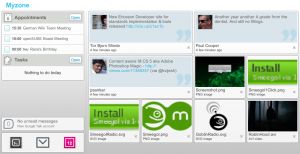 The developers of OpenSUSE Linux have launched a new version of the operating system which incorporates technology from the MeeGo project. It’s called Smeegol, and like MeeGo, it’s designed for netbooks and other low power computers with small screens.

Smeegol basically uses the MeeGo user interface, which relies on a series of tabs that help you navigate through programs without relying on traditional  start menus or taskbars. Most apps run in full screen mode, and all the software is designed to play well with Intel Atom chips and 1024 x 600 pixel displays.

Smeegol comes with a number of apps preinstalled, including the Banshee music player and Evolution Express for mail and appointments. The Firefox and Google Chrome web browsers are both included out of the box. There are also social networking tools for accessing Facebook, Twitter, Digg, and other social sites.

While Smeegol may look like your typical MeeGo Linux environment, it’s tied to the OpenSUSE infrastructure, which means you can install third party apps from the openSUSE repositories.

You can also create your own distribution based on Smeegol with your own software choices by using the SUSE Studio tool.

Smegol is available for download for 32 bit and 64 bit systems. You can burn the ISO to an optical disc or a USB flash drive to test or install the operating system on your computer.