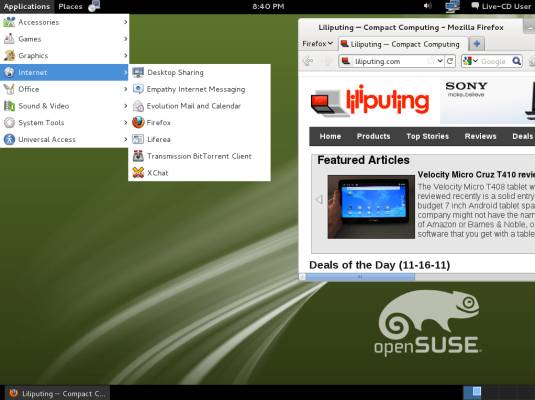 The openSUSE team has released version 12.1 of the popular Linux operating system. The update is available with a choice of desktop environments, including the recently released GNOME 3.2 desktop. You can also choose to use openSUSE 12.1 with KDE, XFCE, or LXDE desktops.

One of the biggest changes is the addition of ownCloud, a system for essentially setting up a web server on your own computer. The idea is that you’ll be able to stream music or movies, update calendar appointments, or perform other actions from anywhere — just like you could if you were using Dropbox, Ubuntu One, or Apple iCloud. But instead of trusting someone else to store you data on their servers, ownCloud runs from your own PC.

While openSUSE doesn’t get as much attention these days as Ubuntu, it’s a stable operating system with a strong support community, and all of the basic features you’d expect from a modern operating system.

You can download openSUSE 12.1 from the project download page and take it for a spin on your computer. I recommend checking out the Live GNOME or Live KDE versions which you can burn to a CD or install on a USB stick to test drive without actually installing anything on your computer or overwriting your existing operating system. All you have to do is boot from the CD or flash drive.

One reply on “openSUSE Linux 12.1 now available, with ownCloud, GNOME 3.2”