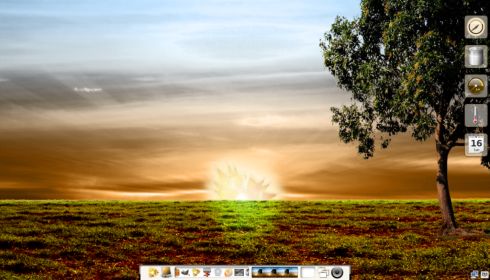 OpenGEU is a Linux distribution based on Ubuntu Linux that uses the E17 Enlightenment desktop instead of KDE, Xfce, or Gnome. E17 is a light weight desktop manager with a window manager, a dock-style program launcher, and some custom programs. Overall, it gives the Linux distro a bit more of an OS X-like feel than other desktop environments that more closely resemble Windows. OpenGEU also uses a number of tools and programs that are found in the Gnome version of Ubuntu.

OpenGeeeU 8.10 Luna Serena is a custom version of OpenGEO designed for the Asus Eee PC. It’s based on the EasyPeasy 8.10 Linux distro, which means that it should support most Eee PC hardware out of the box, including the WiFi, graphics, and sound drivers.

Here are a few other operating systems optimized for netbooks:

And you can find more news and information about netbook-specific operating systems by checking out the Operating Systems tag page.