Over the past few years we’ve seen most makers of eReaders move away from big models with 9.7 inch screens like the Kindle DX to more compact 6 inch models… like most other Kindles. But that hasn’t stopped Onyx from launching a new model with a 9.7 inch E Ink display — and it’s got a few other unusual features as well.

The Onyx M96M Zeus is now available in Russia. 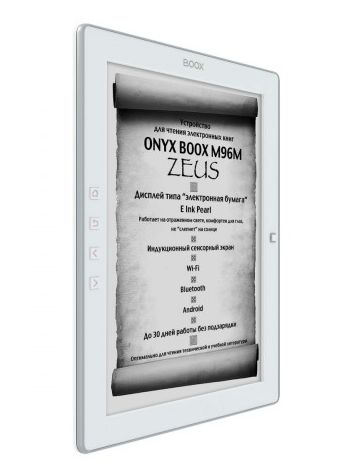 The Zeus runs an operating system based on Android 4.0, and while it includes an Onyx eReader app with support for digital books in a variety of formats (including EPUBC, Mobipocket, TXT, HTML, and more), according to The Digital Reader the device also supports third-party Android eReader apps including Cool Reader and FBReader.

Other features include WiFi and Bluetooth, a touchscreen, and a hefty 1600mAh battery to keep up with the large display and relatively fast processor (for an eReader).

Unfortunately those features come at a cost… in more ways than one. The Onyx M96M Zeus is heavier than a typical eReader, weighing about 1.12 pounds. It’s also relatively pricey, selling for about $420 in Russia.