That’s why I’m calling these “devices” rather than eReaders. They’re more like a cross between a tablet and an eReader. 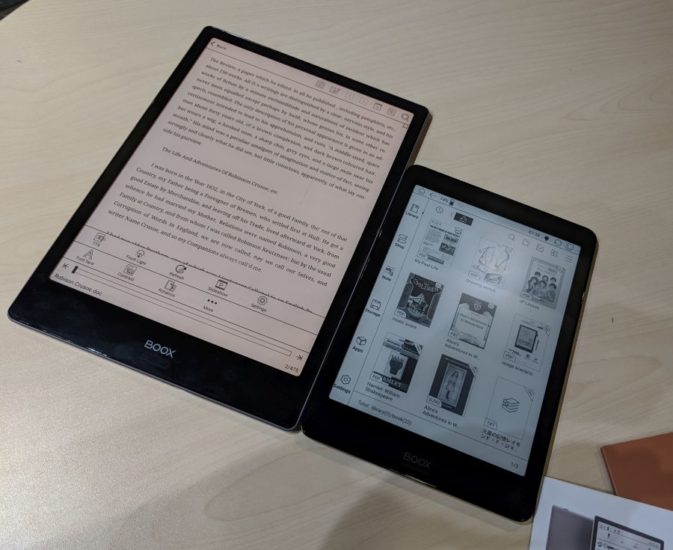 The new models also now have front lights with adjustable color temperature. You can use a set of sliders to decide how warm or cool you want the light to be, which could come in handy for folks that prefer to reduce blue light when reading at night.

Onyx hasn’t announced pricing details for the new models yet.

Both systems are running an operating system based on Android 6.0, allowing you to sideload APK files (I’m told even the Amazon Kindle or Kobo eReader apps should work). Of course, some apps will work better on an E Ink display than others — you probably don’t want to play racing or fighting games that require quick reflexes on a device with a low screen refresh rate.

The Wacom pen that comes with the new Boox devices supports 4096 levels of pressure sensitivity, and palm rejection seemed to work just fine. I placed my hand on the tablet while writing and doodling pictures and didn’t encounter any problems. There is some slight lag, but it wasn’t enough to bother me. Your results/preferences may vary.

Since both models have the same display resolution, you actually get a sharped screen if you opt for the smaller model. But you also get a smaller battery, less memory, and less storage.

Both versions feature USB Type-C ports for charging and data transfer, and both support WiFi, Bluetooth 4.1, and both feature 1.6 GHz quad-core processors. Neither has an SD card slot, but with several times more storage than you typically find in an eReader, that will probably only be a problem if you plan to store an awful lot of large PDFs (or apps) on the device.

Oh, and speaking of apps, Onyx has added an app store to its Boox products. I didn’t get a chance to see how it works, since the devices the company is showing at CES weren’t able to connect to the internet. But it’s a sign the company is trying to expand its business model.