E Ink displays are low power screens which you can see without a backlight. They’re most often found in eReaders like the Amazon Kindle or B&N NOOK Simple Touch, but Chinese company Onyx is showing off new products including an upcoming smartphone featuring an E Ink display.

The company also has a product which looks like an eReader, but which acts more like a tablet thanks to its Android operating system and support for third-party Android apps.

Charbax from ARMDevices has a video demonstrating each type of device. 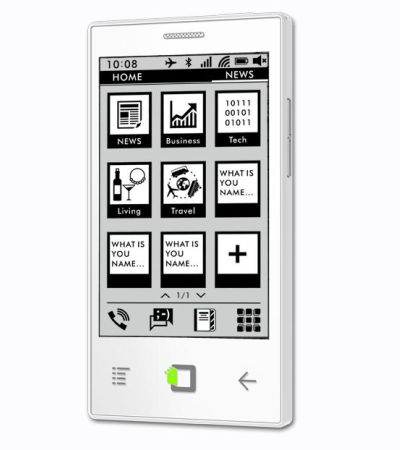 The Onyx E43 phone has a 4.3 inch E Ink display, a 1 GHz processor, and it’s expected to launch this summer. The tablet/eReader is still a prototype which hasn’t yet entered mass production.

Nate at The Digital Reader did some digging, and uncovered two different versions of the Android eReader.

The Onyx BOOX R65 has an E Ink screen, WiFi, a front-light, and an IR touchscreen. It’s powered by a 1 GHz ARM COrtex-A8 processor, has 256MB of RAM, 4GB of storage, and runs Android 2.3 software.

The Onyx BOOX C65 has similar specs, but it appears to have a capacitive touchscreen instead of infrared.

Both models feature eBook software that supports EPUB and PDF files with Adobe DRM, as well as other formats such as HTML, TXT, and FB2. The each have microSD card slots and support for text-to-speech.