As expected, Onyx is showing off several new products at the Hong Kong Global Sources Fair this week… including a laptop with an E Ink display.

But it turns out the Onyx Boox Typewriter isn’t just a laptop. It’s actually a 2-in-1 device featuring a tablet section and a detachable keyboard. Oh, and it supports pen input as well.

Charbax from ARMDevices got a chance to check out an early version.

Update: Notebook Italia also has a video, where we find out that the Onyx Book Typewriter is still just a prototype, but that it could be ready “at the beginning of 2018). 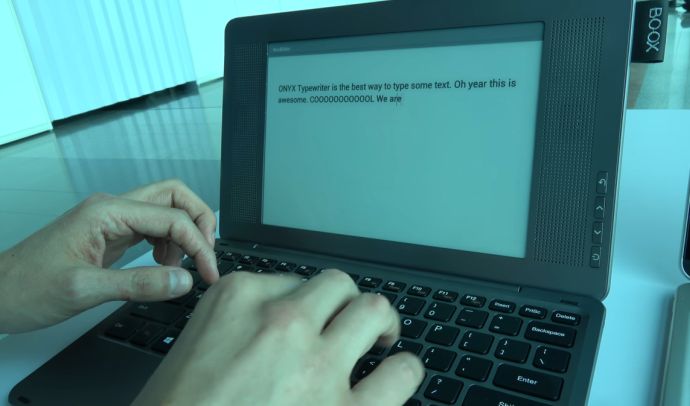 The display portion features a 9.7 inch, 1200 x 825 pixel E Ink Carta screen which is visible in direct sunlight and which has low power consumption, allowing the Boox Typewriter to offer long battery life from a relatively small battery.

The device features a capacitive touchscreen, but thanks to pen input, you can also jot hand-written notes or sketch on the screen.

When attached to the keyboard section, the Onyx Boox Typewriter becomes a laptop, and since the device runs Google Android it’s not limited to functioning as a gadget for reading and writing. You could also run any number of other Android apps… although E Ink displays tend to have low screen refresh rates, so you probably won’t want to play  lot of black and white videos or play black and white games.

The Onyx Boox Typewriter also uses a pretty old version of Google’s mobile operating system: the software is based on Android 4.0, which means some newer apps may not run.

It features a 1 GHz ARM Cortex-A9 processor, 1GB of DDR3L memory, 16GB of storage, and a microSD card slot. The gadget also has a micro USB 2.0 port, a 3.5mm audio jack, a mic and speaker, and the whole thing weighs about a pound.

The system supports both WiFi and Bluetooth, and you can use Bluetooth to pair it with a phone or computer for document sharing. For example, you could start working on a document on a PC, transfer it to the Boox Typewriter, and continue working on the low power device when you want a somewhat more distraction-free environment, or when traveling somewhere that you don’t expect to have a lot of wall outlets for plugging in and recharging your laptop.

Despite Charbax’s enthusiastic response to the assertion that the Onyx Boox Tpewriter gets up to 25 days of standby time (or half that when Bluetooth is enabled), Onyx hasn’t actually provided stats for how long the battery should last when you’re actually using the Boox Typewriter.

Part of the reason eReaders like the Amazon Kindle, B&N NOOK, and other Onyx devices get long battery life is because E Ink displays only draw power when the screen is refreshed… and when you’re reading an eBook you probably only refresh the screen once or twice a minute. Clearly you’ll need a higher refresh rate than that if you’re using this device as a typewriter.

The good news is that while most eReaders have pretty small batteries (890 mAh for a 7th-gen Kindle, for example), the Onyx Boox Typewriter has a 4,100 mAh battery which should help the system keep up with the more frequent screen refreshes.

But it’s still one of the most interesting electronic paper products I’ve seen in a while, and I’m curious to see how much it sells for if and when the Boox Typewriter comes to market.