Onyx makes eReaders and other devices with E Ink screens. For the most part, the company’s products are Kindle-sized. But Onyx also has a 9.7 inch model called the Prometheus, and last year the company launched a 13.3 inch eReader called the Onyx Boox Max.

Now there’s an updated large-screen mode. The Onyx Boox Max Carta is virtually identical to the original Max in most respects, but it has one key new feature: a higher-resolution display. 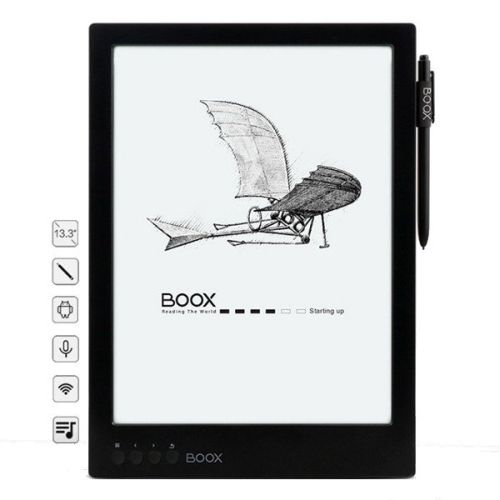 There aren’t a lot of 13.3 inch E Ink devices on the market. Sony has a new one, and last year eBook blog Good e-Reader launched one through a  crowdfunding campaign.

And with scarcity comes… a high price tag. There are only a few places to buy an Onyx Boox Max Carta right now. German retailer eReader Store is selling it for € 669 ($728) before tax. And Chinese gadget store Banggood is currently selling the Onyx Boox Max Carta for $679… but that’s a promotional price that ends on May 10th.

You could buy a lot of Kindles for that kind of money. But you wouldn’t be able to view large, high-res PDFs as well on their 6 inch displays. Fans of big-screen devices like this often cite their utility for viewing blueprints, textbooks, and other content that was originally formatted for larger screens.

The Onyx Boox Max Carta has a touchscreen and supports stylus input for handwritten notes and annotations.

While it requires different software, Onyx has also shown that it’s possible to use the same hardware as a secondary screen for a computer: