After years of focusing on “flagship killer” phones, OnePlus introduced the €399 ($470) OnePlus Nord this summer, bringing not-quite-flagship-class specs to a mid-range smartphone.

All told, it sounds like a phone that could give the Google Pixel 4a 5G and/or Pixel 5 a run for its money in most respects… except that rather than Google’s dual-camera system (which still manages to take some of the best photos you can get from a smartphone), OnePlus opted for a quad-camera system featuring a 64MP primary camera, 8MP ultra-wide camera, 2MP macro camera, and 2MP monochrome camera. There’s also a 16MP front-facing camera. 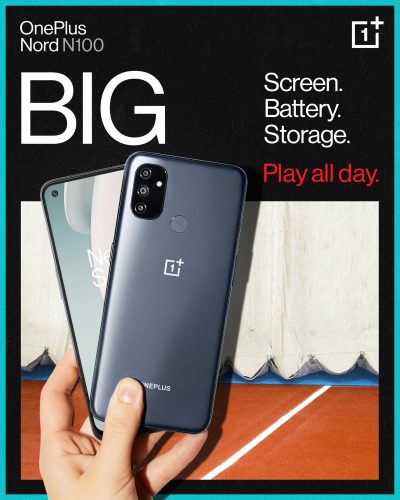 The new OnePlus Nord N100 meanwhile, features less impressive specs, but a much lower starting price: it’s expected to sell for £179 ($233) in the UK.

Powered by a Qualcomm Snapdragon 460 processor, the OnePlus Nord N100 lacks support for 5G, has 4GB of RAM and 64GB of storage, and sports a 13MP primary camera plus 2MP bokeh and macro cameras on the back of the phone and an 8MP front-facing camera.

But it does have a large 5,000 mAh battery which should make it a battery life champ. Other features include a rear fingerprint sensor, USB-C port, 18W fast charging, a 3.5mm headphone jack, and a microSD card reader. It’ll also have a 90 Hz display, which is highly unusual for a phone in this price range.