Less than half a year after introducing the OnePlus 6 smartphone, Chinese phone maker One Plus is back with the OnePlus 6T.

The new model has more RAM and more storage than its predecessor, but the first thing you’ll probably notice is the new design: the OnePlus 6T has a smaller notch and a bigger, slightly higher resolution display.

It adopts the “waterdrop” style notch popularized by Vivo and Oppo in recent months. You probably wouldn’t be surprised to know that all three companies are owned by the same parent company, BBK.

The OnePlus 6T will be available November 1st. Prices start at $549 for a model with 6GB of RAM and 128GB of storage. 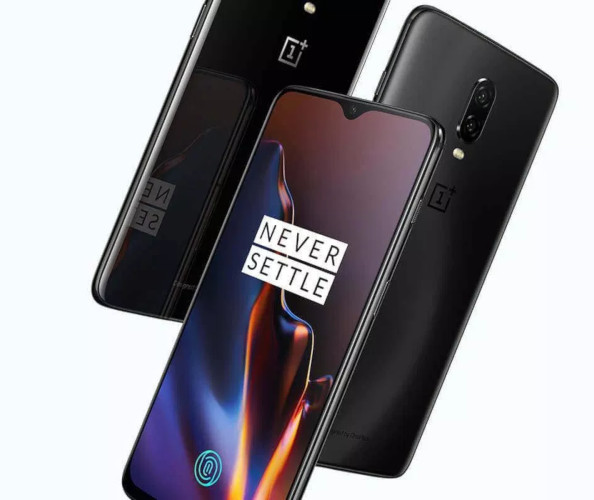 It will also be the first phone from OnePlus to be available through a US wireless carrier. T-Mobile will offer the phone in 5,600 retail stores around the country. And customers who trade in select phones (including any previous OnePlus phone) will be able to save up to $300 off the Price of a 6T purchased from T-Mobile.

While the official launch date is November 1st, OnePlus and T-Mobile are also holding a pop-up in New York City’s Times Square this evening at 5:00 where customers will be able to buy the phone early.

Folks who want to buy the phone and use it on another carrier can also pick up an unlocked model. 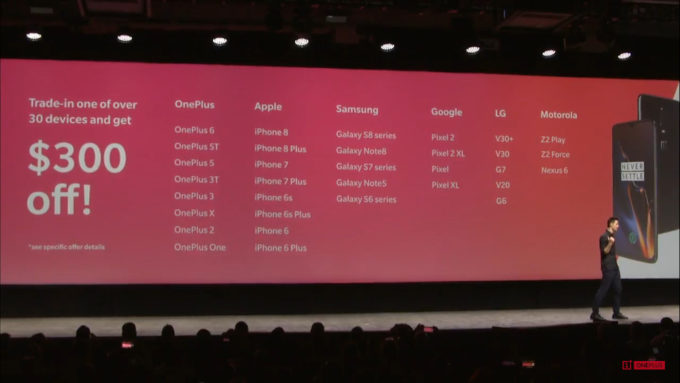 Other features for the new phone include a Qualcomm Snapdragon 845 processor, up to 8GB of RAM, up to 256GB of storage, a 3,700 mAh battery, and a dual rear camera system that features a 16MP primary camera and a 20MP secondary camera.

The OnePlus 6T will ship with Android 9 Pie software and the latest version of the Oxygen OS user interface.

OnePlus says it considered including the feature in last year’s OnePlus 5T, but determined that it wasn’t good enough yet. The company now says the sensor in the OnePlus 6T is just as secure as a traditional fingerprint sensor, and unlocks in about a third of a second.

While we’ve seen a number of phones with in-display fingerprint sensors from Chinese phone makers in the past, the OnePlus 6T will be the first phone offered in the United States with that technology.

The company says the phone’s display support sup to 600 nits of brightness, features a smaller notch and chin, and features a display density of 402 pixels per inch. There are also five different color profile settings including sRGB, DCI-P3, adaptive, custom, and default.

OnePlus will offer the phone in two colors/finishes at launch. Both are black, but one has a matte finish and the other has a “mirror” or glassy look. Both versions have glass backs.

OnePlus says it takes about two seconds to capture an image using Nightscape. And like Google’s Night Sight, since the new technology is software based, it will be available for older phones — OnePlus says it’s coming to the OnePlus 6 via a software update.

A few things the new phone doesn’t have? A headphone jack, wireless charging support, or a microSD card slot. Apparently the definition of the company’s “never settle” slogan is a moving target.