Smartphone maker OnePlus plans to reveal its second phone on July 27th, and the company is holding an unusual press event: the whole thing will be streamed live over the internet in virtual reality. But what if you don’t have a VR headset? No problem… OnePlus is giving them away. 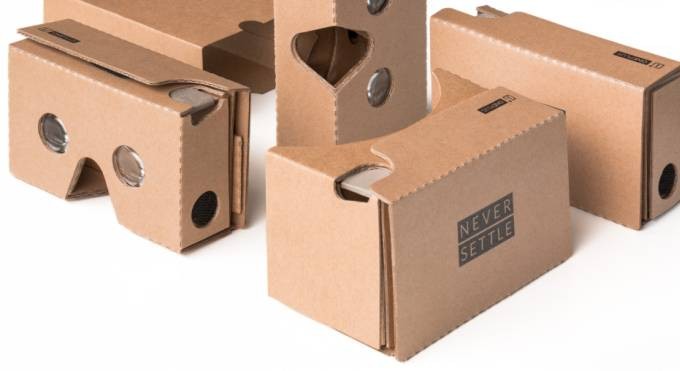 OnePlus designed a custom version of Google Cardboard, which is a cheap mount that lets you hold your phone up to your face to view 3D content which moves as you move your head.

Anyone can make their own Cardboard unit, but if you don’t have the supplies it’s usually cheaper and easier just to buy a Cardboard product or kit. Some stores sell them for less than $5.

But OnePlus will be offering its own Cardboard units (which it says are more durable than most, which support phones with screen sizes up to 6 inches, and which have a few other tweaks) for free. You just have to pay for shipping and place an order before stock runs out: OnePlus is only offering a limited quantity.

The OnePlus Cardboards will be available starting July 3rd.

Don’t want to pay for shipping? OnePlus is also running a contest starting today. The company will choose 1,000 winners and cover the costs of shipping.

Even if you have no plans to buy a OnePlus 2 smartphone, it might be worth trying to snag one of the free headsets.

As for the OnePlus 2, we already know a few things about the phone: It will have a Qualcomm Snapdragon 810 v2.1 processor, a USB Type C connector, a fingerprint scanner, and a price tag of $322 or higher.

Update: It turns out the OnePlus Cardboard isn’t “free” for everyone: if your’e in India you’ll need to pay 99 Rupees, or about $1.55.