The OnePlus 6 smartphone goes on sale next week with prices starting at $529 for a model with 6GB of RAM and 64GB of storage.

As expected, the phone features the kind of specs and design you’d expect from a 2018 flagship, including a Qualcomm Snapdragon 845 processor, dual rear cameras, a water resistance chassis, dual cameras, and fast charging support.

Oh, and it also has a headphone jack… something a lot of modern flagship do not have.

But in today’s launch announcement, OnePlus focused more on design, software, and performance than on specs. 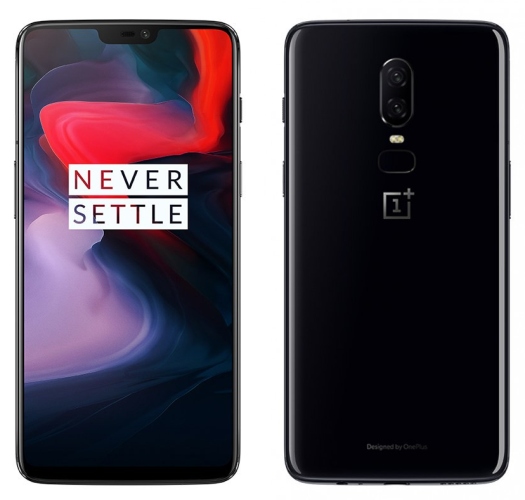 For example, the OnePlus 6 is the first smartphone that lets you shoot 1080p slow-motion video at 480 frames per second for up to a minute and then later choose which portions of the video to show at normal speed and which to slow down.

The company also notes that the OnePlus 6 has the biggest display of any phone the company has offered to date, but that the phone is about the same size as its predecessor. You can thank the controversial notch for that: it allowed OnePlus to put a 6.28 inch display with a 19:9 aspect ratio into the phone.

OnePlus says users also have the option of freeing up some space at the bottom of their phones by using gesture-based navigation instead of an on-screen navigation bar. Just swipe up to go to the home screen, or swipe left or right to go back.

Google is also bringing gesture support to Android P… but for now Google is adding gestures to the navigation bar rather than eliminating it, so OnePlus may be a bit ahead of the curve here.

The OnePlus 6 has a glass back that’s covered with Corning Gorilla Glass 5. The company says it’s as durable as the company’s previous phones, although I wouldn’t blame you for stuffing the phone in a case if you’re the sort of person who makes a habit of dropping phones onto hard surfaces.

Other features include a 3,300 mAh battery, 20MP + 16MP rear cameras with optical and electronic image stabilization, a fingerprint sensor on the back and face unlock capabilities using the front-facing camera a 3,300 mAh battery with fast charging support (but no support for wireless charging), Bluetooth 5.0, and NFC.

OnePlus has also updated its camera software with a new video editor that lets you crop videos and add filters or background music. Portrait mode photos also support effects such as adding stars, hearts, or other flair to the blurred background of a photo. And OnePlus will roll out a software update soon that will let you snap portrait-style photos using the front-facing camera (a feature that used to be exclusive to Google’s Pixel phones).

The OnePlus 6 will come in three prices/configurations:

OnePlus also unveiled its new Bullet Wireless headphones today. The $69 earbuds have a light-weight aluminum shell and a magnetic design that allows one earbud to snap to the other when not in use.

That magnetic snapping feature also functions as a power button: snap the buds together to turn them off, and detach them to start listening.

When Paired with a OnePlus 5 or newer smartphone, the Bullet Wireless earbuds support automatic resume, allowing you to pick up listening to music where you left off as soon as you turn them on. And you can use the unsnap action to answer phone calls.

The earbuds also support fast charging via USB Type-C, allowing you get 5 hours of audio playback time from a 10 minute charge.