OnePlus made a name for itself in 2014 by launching a smartphone with top-tier specs and a mid-range price. The 2015 OnePlus 2 hasn’t been as well received as the OnePlus One, but the company followed it up with the launch of a smaller, cheaper OnePlus X phone that people do seem to like… if they can use it. The OnePlus X doesn’t support LTE networks in the United States.

So what’s next for OnePlus? If leaked benchmark results are to be believed, a OnePlus 3 smartphone with all the specs you’d expect from a flagship smartphone in 2016. 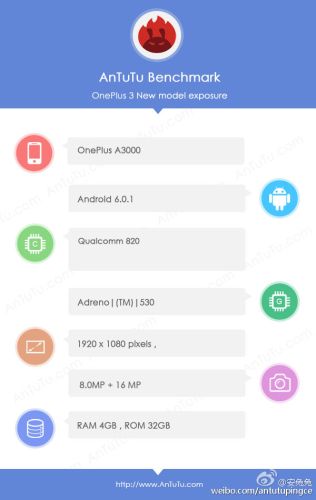 AnTuTu has posted an image showing the alleged specs for an upcoming OnePlus 3, also known as the OnePlus A3000.

The phone is said to have:

There’s no word on how much the phone will cost, when it will go on sale, or if it will have NFC or wireless charging (two features some people had been hoping for from the OnePlus 2).