The latest flagship smartphone from OnePlus features a 5.5 inch full HD AMOLED display, a Qualcomm Snapdragon 820 processor, 6GB of RAM, and 64GB of storage… and unlike earlier OnePlus phones, you’ll be able to buy the OnePlus 3 without requesting an invite.

OnePlus is giving folks who download and run its virtual reality app first crack, but the phone should be available to everyone later today. 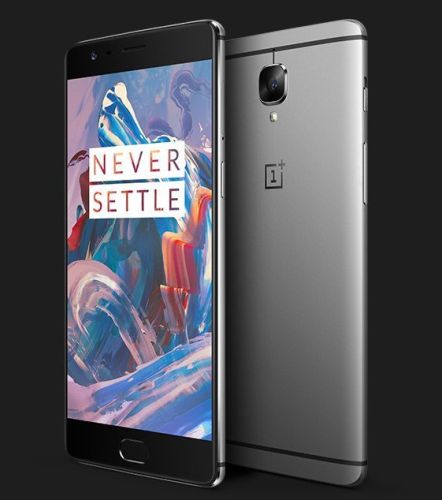 The phone features a Sony IMX298 16MP rear camera with auto HDR and a Sony IMX179 8MP front-facing camera with a “smile capture” feature that lets you snap a selfie just by smiling at the phone.

OnePlus includes a “Dash Charge” feature for quickly charging the phone’s 3,000 mAh battery. The company says you can get a 60 percent charge for all-day battery life in about 30 minutes, while keeping the phone from overheating.

There’s a fingerprint sensor built into the home button on the front of the phone, and the OnePlus 3 has a USB Type-C port and supports 802.11ac WiFi, Bluetooth 4.2, and 4G LTE (with support for AT&T and T-Mobile in the US).

It has a bottom-facing speaker, dual microphones with noise cancellation, and a 3.5mm headphone jack (which isn’t necessarily a given anymore). The OnePlus 3 ships with a customized version of Android 6.0 Marshmallow called OxygenOS.

The OnePlus 3 has an aluminum unibody case that comes in graphite or gold color options.

While the phone is priced lower than many other 2016 flagships, it’s got pretty competitive specs: while it doesn’t have a QHD display, it does have 6GB of RAM. And early reviews seem to be pretty good, based on what I’ve seen from The Verge, Gizmodo, Engadget, and Android Central.

If it had a 5 inch screen, I’d bee seriously tempted to finally replace my 2013 Nexus 5.