When a manufacturer like Dell or HP offers up an all-in-one, it’s usually a desktop monitor with a PC crammed behind the panel. Sometimes a company comes along and squeezes in a little more “all.”

Take the T1 from Onenuts. From looking at the image, you might think it’s a chunky tablet meant for industrial environments. It’s not, though. At least it’s not just a tablet. It’s also a desktop mini PC, with all the ports you’d expect from one: HDMI, Ethernet, USB.

It does have an integrated 4,850mAh battery, though, so you can definitely use it like a tablet. Here’s where the extra “all” comes in. You can actually use it as a wireless projector, too. 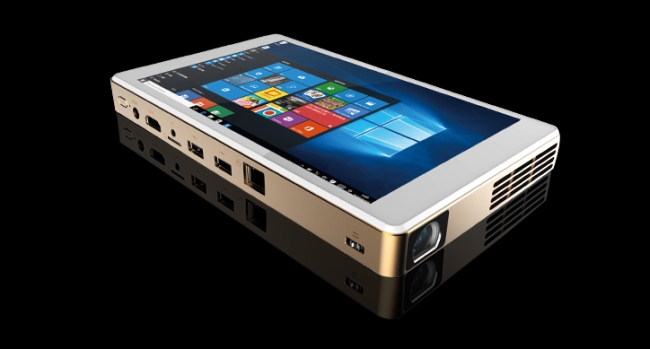 In a lot of ways, the T1 seems like the Gole1, but the T1 features an integrated HD pico projector. While the product page calls it a “full HD” projector, it can’t do 1080p. It’s actually only capable of outputting 720p, though it can produce a respectable 150-inch image. You’ll want the room fairly dark, though, since it can only muster up 300 lumens.

What else does the T1 come with? It runs Windows 10 and features an Atom Z8300 processor, 2GB of RAM, 32GB of internal storage, and 802.11AC WiFi. That’s pretty similar to the Gole1. There are two key differences. The T1’s touchscreen is much larger at 8 inches compared to just 5 on the Gole1, and the base Gole1 has 64GB of storage.

How do they compare when it comes to price? We can’t say yet, because the T1 is only available to resellers and distributors right now. If the larger display and reduced storage are a wash, it should retail for about the same $99 as the Gole1.