One Netbook has been cranking out mini laptops for the past few years, including the pocket-sized One Mix 1S Yoga with a 7 inch display and the slightly larger 8.4 inch One Mix 3 Yoga series (with a much better keyboard).

This year the company plans to launch its first mini-laptop designed for gaming. And while the company hasn’t had much to say about the upcoming One Netbook One GX to date, today we got a few new details — including a call for beta testers and a first look at the keyboard. 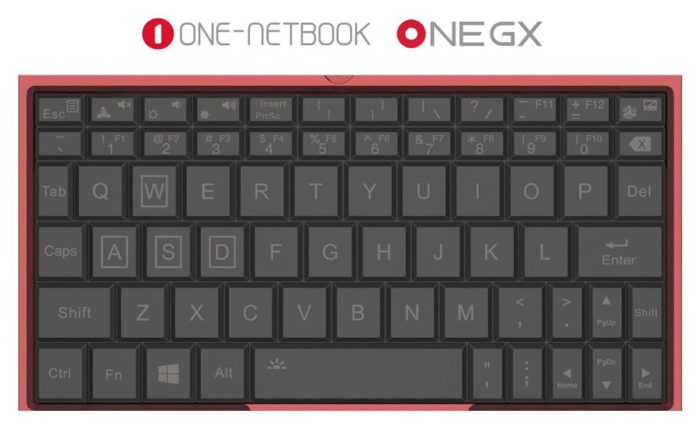 The One GX is expected to feature a 7 inch display, and there have been some indications that it will ship with one of Intel’s upcoming Tiger Lake processors with Iris Plus graphics and a detachable game controller.

We haven’t seen any official images of the device yet… except for the keyboard picture shown above. So while we don’t know much about the physical design of the little computer at this point, there are a few new things we can see from the keyboard alone.

The W, A, S, and D keys are highlighted to help them stand out — these keys are often used to control direction in PC games.

It looks like there are also keys in the top row of function keys that may help control fan speed to help users prioritize performance and cooling or noise depending on their needs. And the icon on the space bar indicates that we’re looking at a backlit keyboard.

Unfortunately the keyboard does look a little cramped — which is hard to avoid when you’re making a keyboard designed for touch-typing on a device with a 7 inch screen. For example, there are a bunch of keys that are only half-width, including some punctuation keys, the tab, right shift, and arrow keys.

The top two rows of keys (for numbers and special functions) are all half-height.

In my experience, these sorts of compromises make touch-typing difficult… but not impossible. It takes a little while to get used to the quirks of a mini-laptop keyboard, the longer you use it the faster you’ll find yourself typing… for quick bursts anyway. Holding your fingers close together can get uncomfortable during extended typing sessions, so I’d rather use a 7 inch mini-laptop for writing quick notes or emails than for typing out a novel.

Update: One Netbook has also released what may be a picture of the game controller… although it’s hard to see how you’d hold a mini-laptop between those grips: 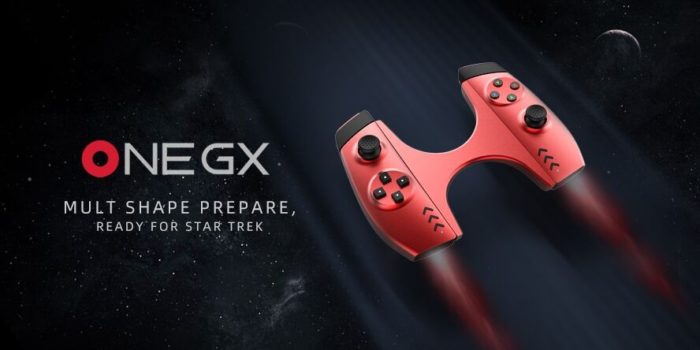 One Netbook says folks interested in participating in beta testing/reviewing can reach out via Facebook and Twitter. A graphic released by One Netbook refers to the One GX as a “pocket gaming laptop,” which would seem to confirm that it will have a 7 inch screen rather than a larger display — it’s hard to cram anything with an 8 inch or larger display into a pocket unless you have very large pockets. 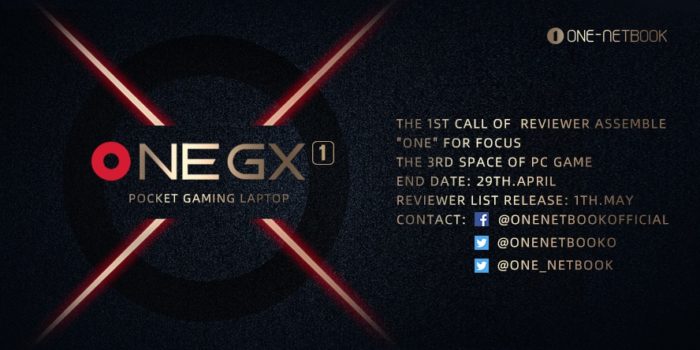 That could help set the One GX apart from the other mini gaming laptop that’s expected to launch this year.

The upcoming GPD Win Max is expected to have an 8 inch touchscreen display, an Intel Ice Lake processor with Iris Plus graphics, 16GB of RAM, 512GB of storage, and a design that makes it look like a tiny laptop crossed with a Nintendo DS thanks to game control buttons (and a touchpad) above the keys.