The One Netbook A1 Pro is a mini-laptop computer with a 7 inch, 1920 x 1200 pixel touchscreen display, a 180-degree swivel hinge that lets you flip the screen and fold it back over the keyboard for use in tablet mode, and a decent selection of I/O features including full-sized Ethernet and RS-232 serial ports that could be useful to to IT professionals.

If the A1 Pro looks familiar, that’s because they physical design is virtually identical to the original One Netbook A1 which launched in 2020. But the new Pro model features a few key upgrades including support for up to an Intel Core i7-1160G7 processor, 16GB of RAM, and a 512GB SSD. The One Netbook A1 Pro is available for purchase from the One Netbook AliExpress shop for $1079 and up. 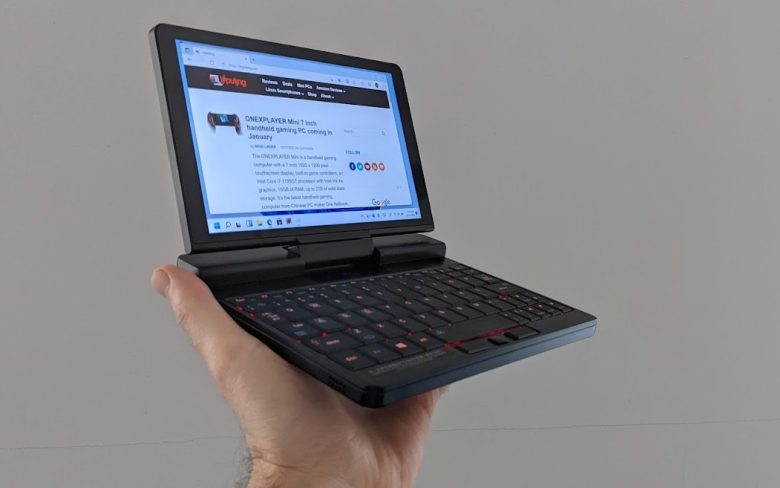 That’s a significant price hike over the original, which currently sells for around $650 if you can find a store that still has it in stock. But the new version has a significantly more powerful 11th-gen Intel Core processor rather than an 8th-gen low-power chips, and support for up to twice as much memory as the original (although entry-level configurations have the same 8GB of RAM).

Here’s how the new model stacks up against the original in terms of specs:

One Netbook sent me a demo unit with a Core i5 processor, 8GB of RAM, and 512GB of storage for testing. I haven’t seen pricing for this particular model yet, but I imagine it will cost a little less than the Core i5/16GB version. While One Netbook is targeting IT professionals with the A1 series, the One Netbook A1 Pro is very much a fully functional computer that can be used by anyone. The unit I’m testing shipped with Windows 11 Home software pre-installed and also supports booting from a USB flash drive, so I plan to test a Linux distribution or two on it soon. 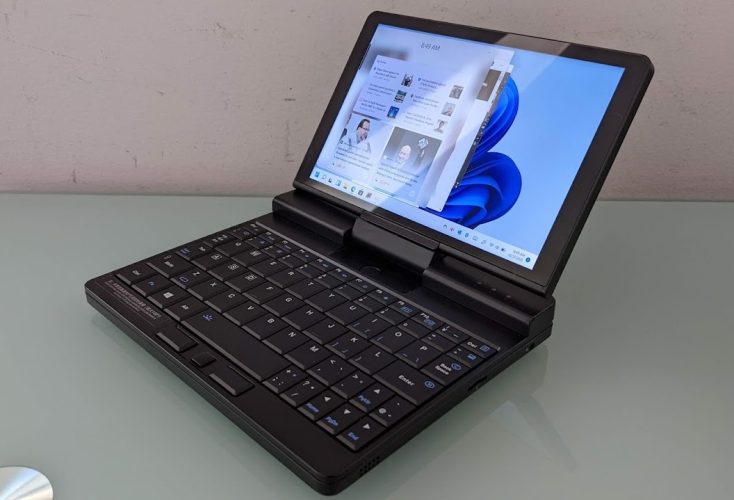 The keyboard is rather small and cramped, but it’s just barely large enough to make touch typing possible. Unfortunately One Netbook made at least one unfortunate change to the keyboard layout for the Pro model: the @ key has been moved to the right side of the keyboard to make room for a few performance profile keys that you can trigger by pressing Fn+1, Fn+2, or Fn+3.

While it’s nice to be able to switch the CPU and fan behavior to prioritize performance or quiet computing, it was a bit maddening hunting for the @ key when I was trying to enter an email address only to eventually find that I had to press Fn+` to trigger it… and the ‘ key was on the opposite side of the keyboard to where you’d usually find it. 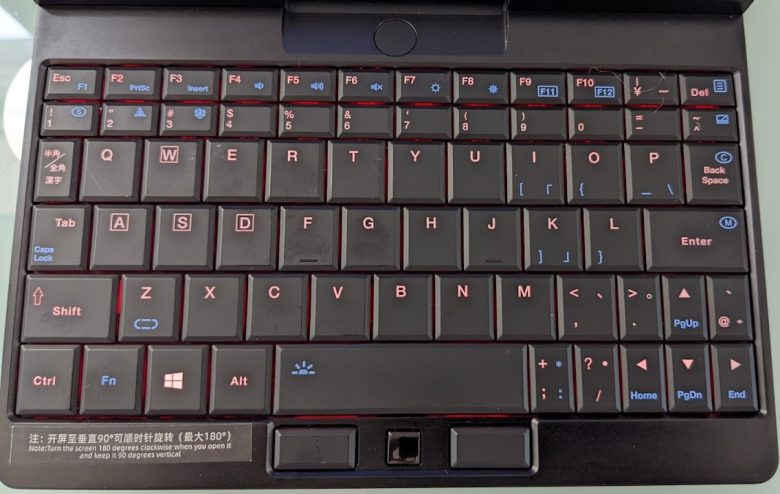 That said, it’s hard to fit a full-sized keyboard on a laptop that measures just 6.8 inches across, so it was inevitable that One Netbook would have to make some compromises.

Another thing to keep in mind about the One Netbook A1 and A1 Pro is that they have microphones, but no webcams. That’s less than ideal in a world where video conferencing is increasingly important, but odds are that you can probably take calls on a phone if you really need to.

There’s also no room for a full-sized touchpad, so One Netbook instead uses a small optical touch sensor below the space bar. It doesn’t support multi-finger gestures, but it will allow you to move a cursor across the screen without reaching up to touch the display and there are left and right buttons on either side of the sensor. 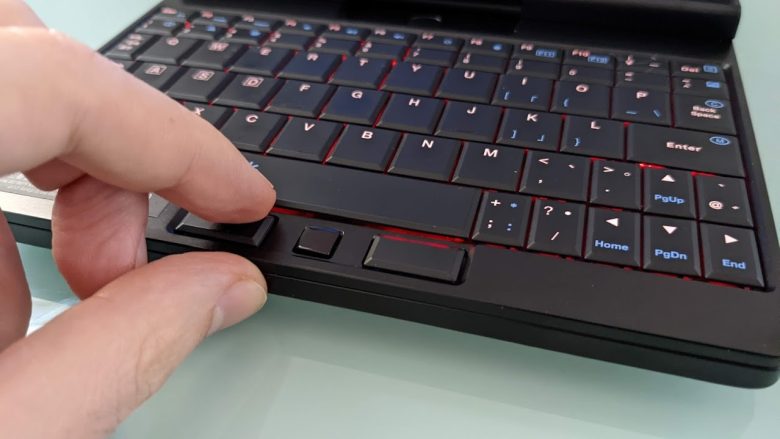 One Netbook isn’t the only company playing in the mini-laptop, full-sized ports space. It’s likely that the One Netbook A1 was a response to the GPD MicroPC, a $399 handheld that was released in 2019 with a 6 inch display, thumb-sized keyboard, and full-sized HDMI, Ethernet, USB, and RS-232 ports. 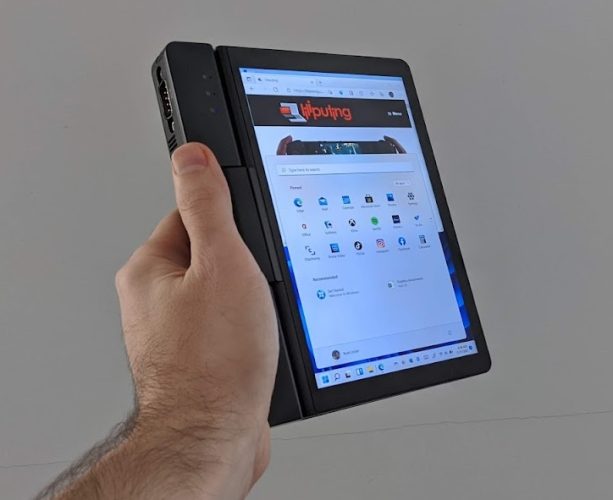 This year, GPD released the GPD Pocket 3 mini-laptop with an 8 inch swivel-hinge display, pen support, and a larger keyboard designed for touch typing. If the One Netbook A1 is a larger, more versatile alternative to the MicroPC, the Pocket 3 is a larger, more powerful, more versatile alternative to the A1 thanks to the improved keyboard, included touchpad, and webcam, among other things.

GPD’s Pocket 3 also has a modular port section that allows you to swap out a USB port for either an RS-232 cable or a KVM module with HDMI and USB-C inputs. And the Pocket 3 comes with multiple pricing/configuration options ranging from a $699 model with an Intel Pentium Silver N6000 processor to $999 for a Core i7-1195G7 version.

Now that I’ve got both the A1 Pro and the GPD Pocket 3 sitting on my desk, my initial impression is that the Pocket 3 is probably a better computer in most respects… but at 198 x 137 x 20mm (7.8″ x 5.4″ x 0.8″) and 725 grams (1.6 pounds), it’s a substantially larger device. So if you’re looking for something smaller but didn’t find the original One Netbook A1 to be powerful enough, now there’s another option.

It’s also harder to find the original A1 in stock than it used to be, so it may be one of the only other options.

I’ll have more details on performance and battery life soon. For now, here are some more photos of the One Netbook A1 Pro: