The One Mix Yoga is a laptop computer with a 7 inch touchscreen display. It’s small enough to slide into a pocket… if you have fairly large pockets. But it’s a full-fledged Windows PC with an Intel Atom Cherry Trail processor, 8GB of RAM, and 128GB of storage.

Oh, and it’s also a tablet. The One Mix Yoga has a 360-degree hinge that lets you fold the screen back for use in handheld mode. It also comes with an active pen.

The One Mix Yoga went up for pre-order from Geekbuying recently for $460, and it should begin shipping soon. After writing about it earlier this month, I reached out to the folks at Geekbuying  and they were kind enough to send me a demo unit to test. I’ll have a more detailed review soon, but I wanted to share some initial impressions. 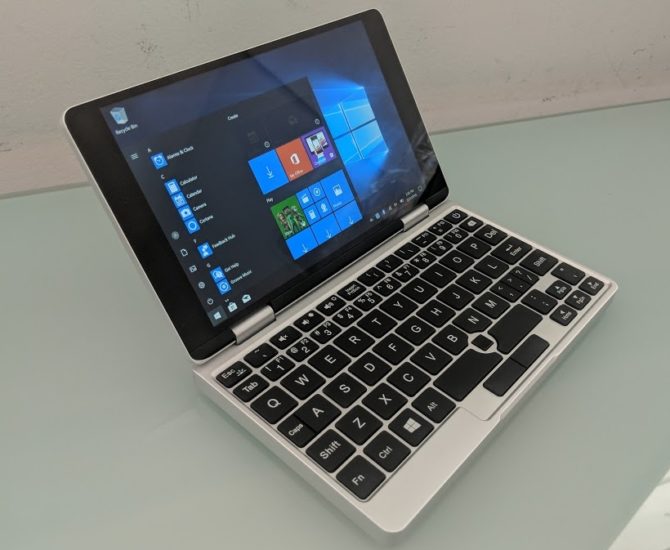 Developed by One Netbook, a subsidiary of Chine device maker Voyo, the One Mix Yoga looks like a GPD Pocket clone at first glance.

The Pocket started shipping last year, and like the One Mix Yoga, it’s a 7 inch mini-laptop that’s small enough to fit in a pocket. In fact, the One Mix Yoga’s keyboard looks suspiciously similar to the one on the GPD Pocket… although the location and layout of the space bar and optical touchpad are a little different.

Anyway, the biggest differences between the two devices are that the Pocket has a faster processor, and the One Mix Yoga has a tablet mode and pen support.

I unboxed the One Mix Yoga in a YouTube Live video, and I was reasonably impressed with the out-of-the-box experience.

The keyboard is tiny, but I’m pretty sure I could get used to typing on it. The touchpad isn’t great… but it’s serviceable and it’s just one of many options for interacting with the computer (you could also use the stylus, touchscreen, or an external mouse). And while it’s really small and light, it also seems to be capable of doing the things you’d expect from a computer including web browsing and video playback.

In the coming days I’ll test it as a tool for editing documents, images, and other content, and see how well it works for reading news and eBooks, playing games, and getting work done.

And I’m also looking forward to trying Linux on the One Mix Yoga.

But I’m already intrigued at the possibilities offered by this tiny PC.

For now, here are some more photos of the One Mix Yoga.

I should point out that the unit Geekbuying sent me is a pre-release prototype. So I’m not too worried about the fact that it shut off unexpectedly a few times.

Update: So it turns out that switching the One Mix Yoga to tablet mode disables most of the keys on the keyboard… but not the power button, which is in the upper right corner. So if you accidentally tap it, which is very easy to do, you’ll put the computer to sleep or turn it off.

In other words, I was holding it wrong.

But it might take a little while before I get used to holding it right.

I also didn’t notice while shooting the video that the power button does light up when the computer is on, because it’s bright in my office today and it was hard to tell the illuminated key apart from the rest of the keys on the keyboard.

Update 2: The demo unit I was sent also has an unactivated version of Windows 10, but a Geekbuying representative tells me that the retail version will activate the first time a user connects to the internet. And my prototype does not have a backlit keyboard, but I’m told that this is an issue with the prototype, and that the final version will indeed have one.