Two months after launching the first mini-laptop powered by an 10th-gen Intel Core processor, the folks at One Netbook are introducing a cheaper option.

The new One Mix 3S+ Yoga is a compact laptop with an 8.4 inch touchscreen display, a 360-degree hinge, pen support, a backlit keyboard, and 8GB of RAM and 256GB of storage. It’s also the first computer from any company that I’m aware of to feature an Intel Core i3-10110Y processor.

You can order the One Mix 3S+ Yoga from GeekBuying for $800. Several AliExpress sellers are also offering it for as little as $760. You’ll have to pay a little more if you want the optional pressure-sensitive pen. 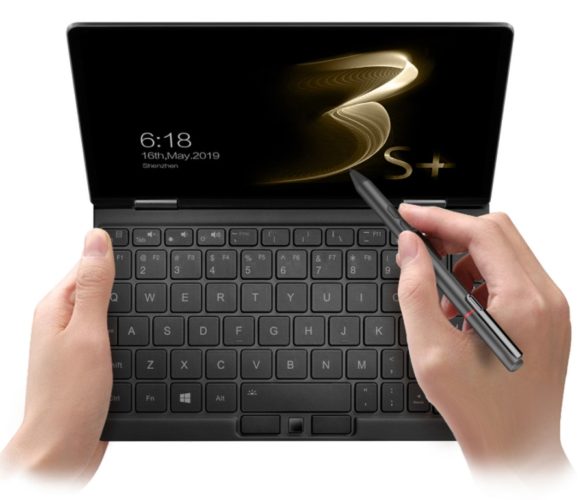 It’s worth noting that GeekBuying ships Chinese goods internationally, often with free shipping. But returns and customer support can be hit or miss. The same goes for AliExpress, which is more of an eBay-like marketplace than a straight up store.

As for the One Mix 3S+ it’s basically an updated version of the One Mix 3 Yoga I reviewed last summer. The design is unchanged, but the processor is brand new. I’m a fan of the keyboard, display, and overall size and versatility of the One Mix 3 series of computers, but battery life wasn’t stellar on the unit I reviewed. I have no idea whether the move from 8th-gen to 10th-gen Intel Core processors has improved battery life and performance or hurt it.

I can say that new Core i3-10110Y processor is a 5.5 watt, dual-core chip with a base speed of 1 GHz and support for turbo boost speeds up to 4 GHz. On paper, that should give it a slight edge over the earlier 5W Intel Core m3-8100Y dual-core processor in some situations.

One interesting thing is that while Intel’s 10th-gen Y-series chips were announced alongside the company’s Comet Lake and Ice Lake processors, the ark.intel.com website lists the Core i3-10110Y and its closest siblings as Amber Lake-Y processors… much like the Core m3-8100Y and Core i7-8500Y chips commonly found in older mini-laptops.

While the laptop is a little too large to comfortable slide into a pocket, it weighs just 1.5 pounds and measures just 8″ x x 5″ x 0.6″, making it pretty tiny compared with most laptops.

Meanwhile, if you have a little more money to spend, the One Mix 3 Pro is also still available. GeekBuying sells it for about $1000.