But next week the company behind that tiny laptop plans to launch a higher-priced model called the One Mix 3S.

The basic design is the same, but it’ll pack a Core i5-8200Y processor, 16GB of RAM and 512GB of storage. And it’ll come in black rather than the silver/grey color of the One Mix 3 Yoga.

Update: It’s up for pre-order for $900 from GeekBuying. 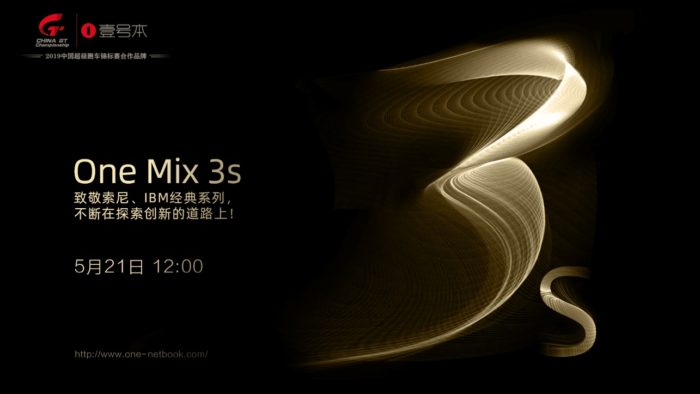 Like its more affordable sibling, the One Mix 3S measures 8″ x 5.1″ x 0.6″ and weighs about 1.5 pounds. It has an 8.4 inch, 2560 x 1600 pixel touchscreen display, a 360-degree hinge that lets you fold the screen back and hold the computer in tablet mode, and support for an optional digital pen (sold separately) with 4096 levels of pressure sensitivity.

The tiny computer has a USB Type-C port, a USB 3.0 Type-A port, a micro HDMI port, and a microSD card slot and it features an 8,600 mAh battery.

In addition to the 512GB PCIe NVMe solid state drive that comes with the system, there’s a second M.2 slot that you can use for additional storage.

While One Netbook had initially claimed you could add our own 4G LTE modem by placing it in the M.2 slot, the company seems to have backed away from that claim in recent marketing materials.

One Netbook hasn’t announced the price for the One Mix 3S yet, but we should find out more when the mini laptop officially launches on May 21st.

For now, I think it’s safe to assume that it’ll cost considerably more than the One Mix 3 Yoga, which is currently selling for $750 at GeekBuying (when you use the coupon code BELWFNVY).