The One Mix 3 Yoga is a tiny laptop with a an 8.4 inch touchscreen display, an Intel Core m3-8100Y processor, and a backlit keyboard. But it’s also a small tablet, thanks to a 360-degree hinge. And thanks to support for digital pens, you can also use it for taking handwritten notes or drawing pictures.

That… is not something I typically spend a lot of time testing in tablets because my own handwriting is awful and my ability to draw is even worse. But I know that a lot of folks wanted to know more about the pen capabilities of the One Mix 3 Yoga, so I shot a little video to show you what I can.

Here’s what I can tell you about the One Mix 3 Yoga’s pen features.

GeekBuying is currently selling the One Mix 3 Yoga for $760 and up, but the entry-level price doesn’t include a digital pen. You can add one to your purchase for an extra $20.

Alternately, if you have a Surface Pen or any other digital pen that supports the Microsoft Pen Protocol, you should be good to go — I was able to use the pen from my HP Spectre x360 with the One Mix 3 Yoga. 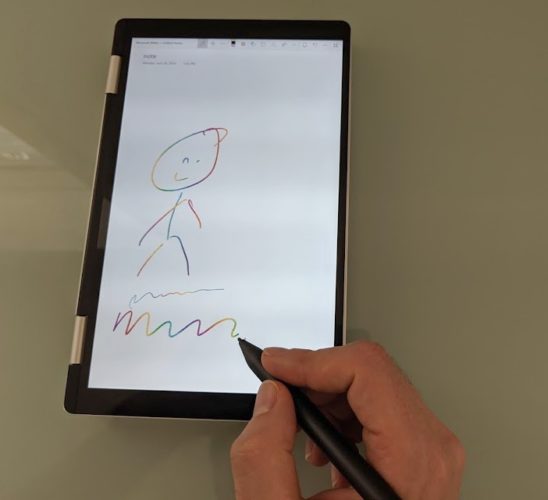 Theoretically the computer supports up to 4096 levels of pressure sensitivity. I don’t really know how to test that, but I did fire up OneNote and do a little scribbling to confirm that gentle touching the pen tip to the glass leads to a thin line while firmly pressing down gives you a thicker line. Pressing a button on the pen and tracing it across the screen also allows it to work as an eraser in supported apps. 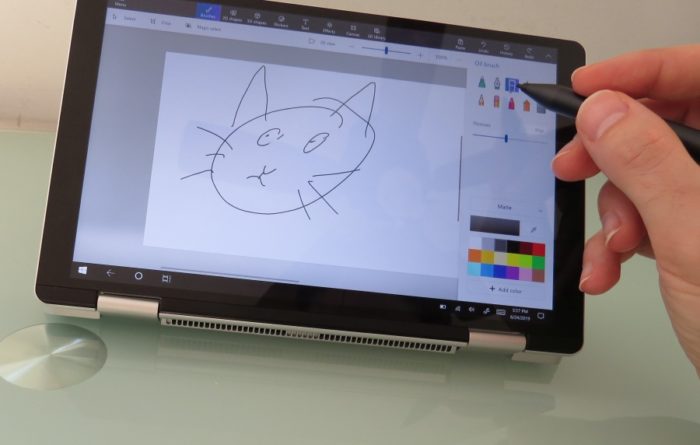 Palm rejection also seems to be present. I was able to place my hand on the tablet while using OneNote and other drawing/writing apps without creating smudges with my palm or stealing focus from the pen.

And I was able to use Microsoft’s handwriting recognition for text entry — although my handwriting is bad enough that the results can be hit or miss. Windows 10 was able to detect common words and convert my handwriting into printed text, but unusual words like “liliputing” were often transformed into near-misses like “Lilliputian” or “limiting.”

All in all, pen input isn’t something I’m going to use very much on the One Mix 3 Yoga. But one thing I do like about an active pen (as oppose to a capacitive stylus that works more like your fingertip), is that you can use the pen like a mouse in ways that makes Windows easier to navigate in tablet mode.

For example you can hover the pen over the tablet to move an on-screen cursor without actually clicking/selecting anything. And you can press a button on the pen and tap the screen simultaneously to emulate a right-click and bring up context menus.

While the One Mix 3 Yoga ships with Windows 10, it can also support alternate operating systems including Ubuntu Linux and Chromium OS, but the pen doesn’t seem to be supported out of the box in either of those operating systems.