The One Mix 2 Yoga is a tiny convertible laptop with a 7 inch full HD display, a 360-degree hinge that lets you use the computer in tablet mode, and support for an optional digital pen.

As expected, the new model looks a lot like the original One Mix Yoga that launched earlier this year, but it has a substantially faster processor, more storage, and a fingerprint sensor.

It also costs more: Geekbuying is taking pre-orders for a model with an Intel Core M3-7Y30 processor, 8GB of RAM and 256GB of storage for $650. 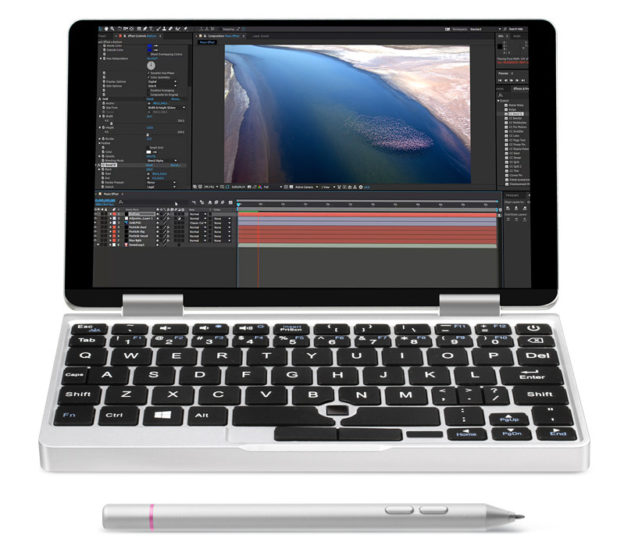 You can also spend an extra $10 to get a model with a pen, which is a pretty good deal if you think you’re going to use it.

Note that prices might go up after the presale ends: Geekbuying is showing a list price of closer to $800. It’d take that with a grain of salt though, since the retailer often shows list prices that it never charges.

It’s possible you might be able to find other configurations in the future: the folks at One Netbook have mentioned offering models with up to 16GB of RAM, up to 512GB of storage, and up to an Intel Core M3-8100Y processor.

When I tested the One Mix Yoga earlier this year I was impressed with the design, a little annoyed at the cramped keyboard, and very underwhelmed by the performance. But that model used eMMC storage and a sluggish Intel Atom x5-Z8350 processor.

The upgrade to a Core M chip and a PCIe SSD should have a big impact on performance.

For the most part the One Mix 2 Yoga has the same design as its predecessor. It still has an aluminum chassis that measures 7.2″ x 4.2″ x 0.7″ and it still features a 7 inch, 1920 x 1200 pixel touchscreen display, a QWERTY keyboard with an optical touch sensor in the middle of the space bar, support for a pen with 2048 levels of pressure sensitivity, a USB 3.0 Type-A port, HDMI port, headset jack, and microSD card reader.

The new model does have a USB Type-C port for charging and data though, which is an upgrade over the micro USB port used on the previous model.