The One Mix 1S Yoga mini laptop ships with Windows 10… but like most modern PCs you can also a different operating system on it. And like most mini laptops I’ve tried in recent years, the out-of-the-box experience is likely to be imperfect.

I took a loaded up a few different GNU/Linux distributions onto USB flash drives, booted into them (by pressing F7 on the One Mix 1S Yoga at the boot splash screen), and checked to see what works out of the box, and what doesn’t.

Here’s what I found. 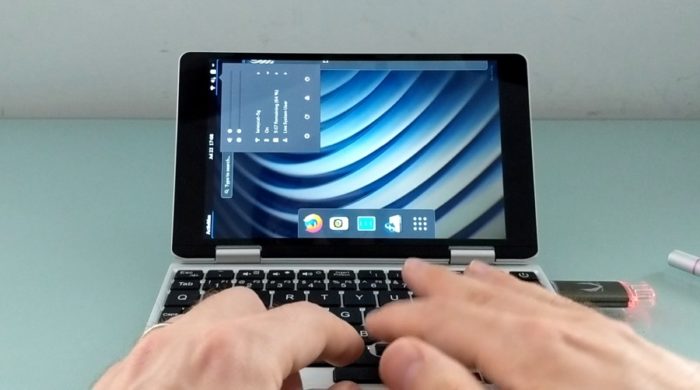 As I noted in my One Mix 1S Yoga review, the little laptop is basically a replacement for the original One Mix Yoga. It’s about the same shape and size, but it has a faster processor, faster storage, and a fingerprint sensor, but it loses the backlit keyboard.

The One Mix 1S Yoga features a 7 inch, 1920 x 1200 pixel touchscreen display, a 360-degree hinge that lets you fold the screen back and hold the computer as a tablet, support for an optional digital pen (that uses Goodix technology), 8GB of RAM, 128GB of PCIe NVMe solid state storage, and an Intel Celeron 3965Y processor.

Priced at about $440, the One Mix 1S Yoga is one of the most affordable laptops around with a screen size smaller than 7 inches.

But it’s also one of the newest models, and I’m not aware of any custom GNU/Linux distributions optimized for this particular computer yet. The folks behind Ubuntu MATE, for example, offer a custom version of that operating system that’s designed for UMPC (Ultra Mobile PC) computers including the GPD Pocket, GPD Pocket 2, GPD MicroPC, and Topjoy Falcon. But it doesn’t yet seem to support the One Mix 1S Yoga (the operating system loads fine, but some of the display tweaks don’t work).

Still, while the out-of-the-box experience with most Linux-based operating systems I’ve tested so far is imperfect, it’s also promising.

For the most part, the keyboard, touchscreen, optical touch sensor, audio, WiFi, and other basic features work without any problems. What’s a little wonky is the display and screen rotation.

Ubuntu 18.04.2 LTS, for example, loads with the screen orientation set to portrait and the display scaling set to 100 percent. The good news is that firing up a terminal window and typing “xrandr -o right” rotated the display 90 degrees so that everything looked fine in laptop mode. The bad news is that the One Mix 1S Yoga has a 7 inch, 1920 x 1200 pixel display and with scaling set to 100 percent, you have to get your eyes pretty close to the screen to see everything — and there’s no simple way to adjust the scaling or screen resolution properly.

Rotating the device does cause the desktop environment to rotate… but when you rotate back to landscape the screen will be sideways again until you run the xrandr -o right command again.

In other words, you can’t easily use the One Mix 1S Yoga as a tablet with this operating system — at least not without making some configuration changes.

I also tried Linux Mint 19.1, and had similar results. The screen was sideways, but I was able to rotate it manually. I was unable to change the display scaling.

When I tested Fedora 30, the display scaling was appropriately set to something closer to 200-percent, making text and images much easier to see. But I was unable to rotate the display.

Since Fedora uses the Wayland display server rather than X.org, the xrandr command is not recognized.

Still, just about everything else worked properly in Fedora except that the screen stays sideways even though automatic screen rotation does work — when trying to use the One Mix 1S Yoga as a laptop, the screen is in portrait mode. When you convert it to tablet mode and flip the screen 90 degrees, the software rotates the screen 90 degrees… so that it’s in landscape when you want it to be in portrait.

Update: This technique for binding screen rotation to a keyboard shortcut works — although I had to modify it to Ctrl + 8 rather than using Ctrl + F8 since pressing Ctrl+Fn+8 didn’t seem to work.

The upshot is that I was able to rotate the display clockwise to make the One Mix 1S Yoga easier to use as a laptop. The keyboard, optical touch sensor, and keyboard shortcuts all worked perfectly in this mode, making Fedora the most usable GNU/Linux distribution I’ve tried so far.

Unfortunately while I was able to rotate the screen using this technique, I was not able to adjust touchscreen and pen input to match — so while I was able to scroll up and down through web pages and other apps by moving my finger left or right, I was unable to accurately touch points on the screen.

I suspect there may be a workaround for this problem as well — if anyone has any ideas, please let me know in the comments.

While I didn’t include this in the videos, I also ran a build of Chromium OS for mini laptops from Keith Myers. This may not technically be a GNU/Linux distro, but with minimal tweaking, it’s more usable than any other non-Windows operating system I’ve tried so far. 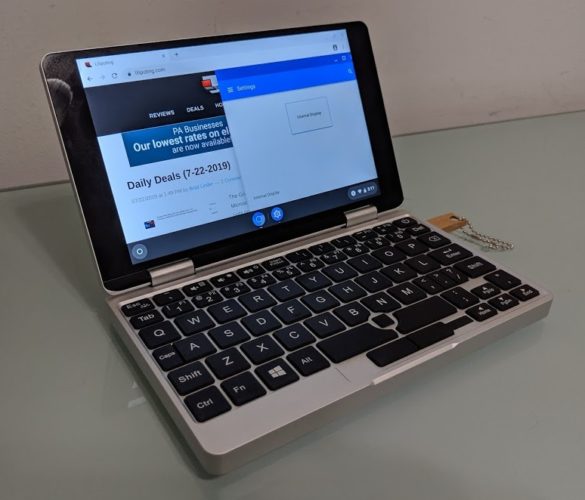 The display is sideways when you first boot the operating system, but all you have to do is open the Chromium OS settings, navigate to the Display settings, and change the orientation to 90 degrees. You can also adjust the “Display Size” to change the scaling options, although the default settings looked pretty good to me.

This modified version of Google’s open source operating system recognized the touchscreen, pen input, keyboard, and optical touch sensor without any problems. WiFi and audio work, and so do keyboard shortcuts for screen brightness and volume.

The one thing that does not work is automatic screen rotation, but you can manually switch to portrait mode by choosing the standard or 180 degree rotation options.

Since I haven’t installed any of these operating systems to local storage, I cannot comment on battery life, real-world performance, sleep, or some other key functions.

But I suspect folks who know a bit more about modifying Linux configuration files may be able to overcome some of the display issues I encountered.

If you’re looking for an operating system that just works on the One Mix 1S Yoga, you should probably stick with Windows 10 for now. But my initial Linux and Chromium OS tests seem promising for folks who might want something different.

The One Mix 1S Yoga is available for purchase from GeekBuying for $440.