One Netbook keeps cranking out new mini laptops. The company recently started taking pre-orders for the One Mix 3 Yoga and One Mix 3S Yoga which are convertible notebooks with 8.4 inch touchscreen displays and Intel Amber Lake processors and prices that start at around $750.

But One Netbook also has a smaller, more affordable model on the way.

The One Mix 1S Yoga is an 7 inch convertible with an Intel Celeron 3965Y Kaby Lake processor, 8GB of RAM, a 128GB PCIe SSD, and a fingerprint sensor.

Update: GeekBuying is taking pre-orders for the One Mix 1S Yoga for $440 and says the mini laptop should ship in mid-July. You can also save $10 when you use the coupon 3ZQUXJGU at checkout. 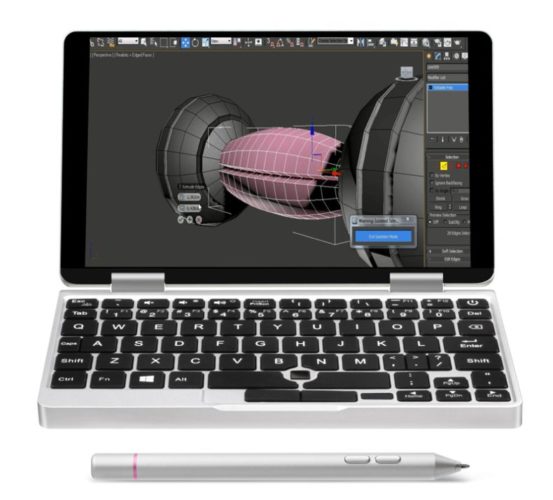 One Netbook hasn’t shared pricing information yet, but the specs certainly point to a device which should be a bit more affordable than the new One Mix 3 series mini laptops.

Like the 1st-gen One Mix Yoga, the new One Mix 1S will feature a 7 inch, 1920 x 1200 pixel display, a , support for a digital pen (sold separately) with 2048 levels of pressure sensitivity, a 6500 mAh battery, and an optical touch sensor rather than a touchpad.

Update: It looks like this probably does not have backlit keys.

One Netbook says the design will be similar to that of the One Mix 2S, which means we can expect an aluminum chassis, a fingerprint sensor next to the space bar, and ports along one side of the little computer.

The One Mix 1S should measure about 0.7 inches thick and weigh about 1.1 pounds, making it a bit larger than a typical smartphone, but a lot smaller than most laptops.

It’s worth noting that this wouldn’t be the first mini laptop to feature an Intel Celeron 3965Y processor. Late last year, GPD launched a Celeron-powered version of the GPD Pocket 2 as a lower-price (and less powerful) alternative to models with Intel Core m3 processors.