The One Netbook One GX handheld gaming laptop with a 7 inch display and detachable controllers is set to go up for pre-order in China later this month, and the company is starting to share more details about what to expect.

For one thing, we finally know what the game controllers will look like. Up until now, we’ve only seen pictures and videos showing the little laptop’s front, back and sides without the controllers.

Update: The OneGX1 mini laptop is now available for pre-order from GeekBuying and Bangood, and we’ve published an in-depth OneGx1 review after testing a version with an Intel Core i5-10210Y processor and 4G LTE modem. 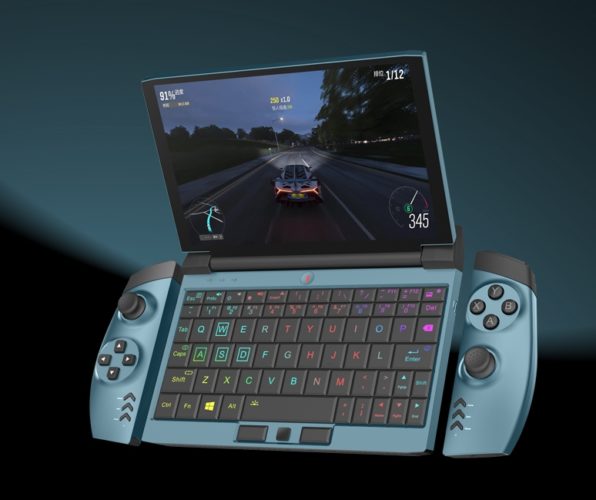 According to a series of promotional images posted to Twitter, the controllers can attach to the side of the laptop, allowing you to hold it in two hands wile playing games on the PC’s 7 inch display. You can also detach the controllers as and put them together for use as a wireless gamepad… or use them separately as two controllers for multiplayer games… although I doubt it’s a feature that many games will fully support.

Basically it looks like One Netbook is trying to make a Nintendo Switch-like device that supports multi-mode gameplay. But while there are plenty of Switch games designed to let you use two independent controllers with a limited set of buttons, the same isn’t true of PC games.

One Netbook says it’ll begin taking pre-orders in for a One GX “Fashion Edition” version starting May 30, 2020. But the company hasn’t officially confirmed the specs for that model, so all we have to go on are little bits of information One Netbook has provided in recent months.

There may be more than one version of the One GX on the way though.

Update: Yep. It looks like the One GX will have an Intel Comet Lake-Y processor. If you want a Tiger Lake chip (with better graphics), you’ll have to wait for the One GX Pro.

A recent spec sheet for a previously unannounced “One GX 1Pro” model suggests that there will be a higher-performance model that will have:

The controllers are said to support a 2.4 GHz wireless connection, but I can’t really decipher any other details — if anyone can decipher the Chinese in this image, let us know in the comments!

Keep in mind that these are the specs for a Pro version of the little laptop… and Intel hasn’t actually launched any Tiger Lake chips yet. When they do arrive, they’re expected to offer a 50-percent graphics performance boost over current-gen Intel Ice Lake processors. But if One Netbook is trying to get a new mini gaming laptop out the door this summer to compete with the GPD Win Max, it seems possible (maybe even likely) the company will first ship a non-Pro version that may feature a 10th-gen Ice Lake processor.

I suspect most of the other specs will be pretty much the same whether you get a Pro or standard version of the One GX.

Speaking of the GPD Win Max, it’s currently up for pre-order for $779 through an Indiegogo crowdfunding campaign. So far the campaign has raised over $1.4 million dollars from over 1,850 backers.