Last year an Australian group called One Education introduced the idea of a 2-in-1 laptop/tablet for students, featuring a modular design that makes it easy to upgrade or replace the screen, battery, camera, and core components including the CPU, memory, and storage.

But a crowdfunding campaign  went nowhere, and now it looks like the modular laptop has been put on the back burner.

Now One Education is taking pre-orders for a much less ambitious 2-in-1 laptop that’s only real distinguishing features are the semi-rugged design, the green and white color scheme, and the fact that the non-profit organization behind the laptop is still hoping to produce a modular version one day. 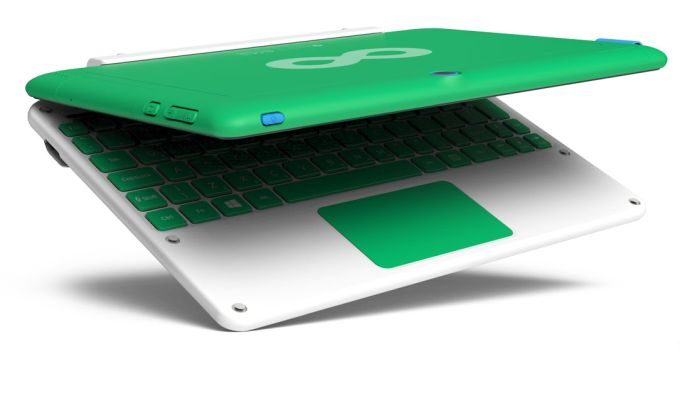 It also comes with a stylus (and a loop on the side of the tablet for storing the stylus when it’s not in use) and a macro lens which you can place over the camera.

Ports include a microSD card reader, micro HDMI port, USB 2.0 and micro USB 3.0 ports and the tablet has a 5MP rear camera and 2MP front-facing camera.

While the original Infinity modular laptop was designed to support Windows, Linux, or Android software, the scaled-back version will ship with one option: Windows 10.

The new Infinity:One may be a far cry from the modular computer One Education originally wanted to build. But this version will probably be a lot cheaper and easier to build, which means it has a much better chance of actually shipping on time.