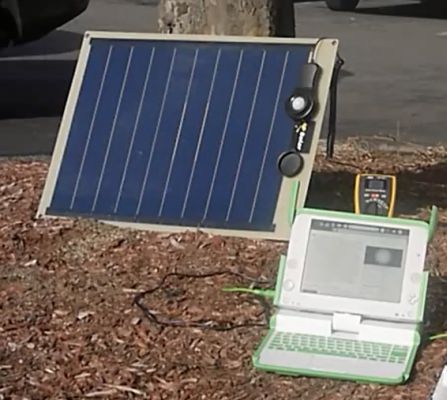 Modern computers aren’t just a lot faster than the PCs you probably used ten or fifteen years ago — they also use a lot less power. But most computers designed to run desktop operating systems still use enough energy that they can’t, say, run directly off the power generated by a small solar panel.

But OLPC is demonstrating that its upcoming XO-1.75 laptop and XO-3.0 tablet will be able to run on solar power. We’re not talking about using a solar panel to charge a battery while the computer’s not in use. You can plug these devices directly into a solar panel, remove the battery altogether, and then use the computers.

The XO-1.75 and XO-3.0 both use low-power 1 GHz Marvell Armada PXA618 processors. The laptop and tablet can also be configured with Pixel Qi low-power LCD displays which use about 80 percent less power than a traditional LCD when you turn off the backlight.

The result is a computer that typically uses just about 5W of power. So if you connect either computer to a 10W solar panel on a sunny day, it should be able to run continuously.

Of course you can also use solar power to charge a battery so that you can use an XO laptop or tablet after dark — and it’s not clear that you’d need to be able to run without a battery very often. But if you need all-day run time in an environment where there’s no electrical grid and plenty of sunshine, it looks like that’s now possible.

Given OLPC’s goals, it’s more likely that we’ll see large solar panels used to charge a group of students’ laptops or tablets in environments without reliable access to electricity.