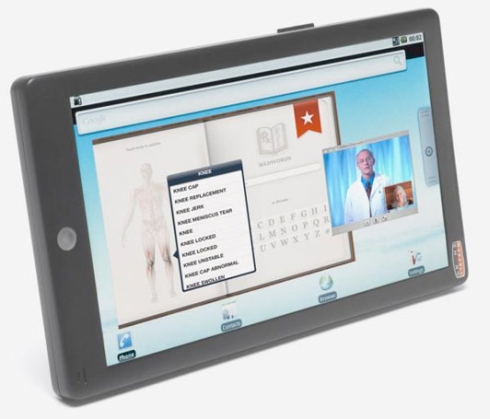 The folks at One Laptop per Child appear to be taking a different approach toward their next-generation hardware. In fact, the next XO product won’t be a laptop at all. Instead it will be a tablet. And instead of designing the tablet in-house like it did the original XO Laptop, OLPC is working with chip maker Marvell to bring the company’s Moby reference design to life.

The tablet will still be aimed at students around the world, particularly those in developing nations. The XO tablet will use just one watt of power, and it wil feature a multi-lingual software keyboard with touch feedback.

The tablet has a webcam for video chat, and features a mobile hotspot feature that lets you share a mobile broadband connection with up to 8 devices over a WiFi connection.

OLPC and Marvell reportedly plan to introduce the new tablet at the Consumer Electronics Show in January, 2011. While OLPC founder Nicholas Negroponte introduced the idea of a touchscreen tablet-style XO laptop last year, the upcoming XO tablet lacks many of the features Negroponte had been shooting for. It won’t be waterproof or thinner than an iPhone.

The original XO tablet design also featured dual touchscreens, as pictured to the right, although that idea was scrapped when OLPC moved on to the OLPC XO-3 concept which would have been a more traditional tablet with a single display — probably an indoor/outdoor low power display from Pixel Qi. But it’s not clear if the new Moby/OLPC tablet will have a Pixel Qi screen at launch.

But Negroponte says that the XO-3 that he envisioned still could be developed by 2012. In the meantime, it looks like instead of launching a revolutionary product, OLPC is set to launch yet-another-ARM-based tablet early next year.

On the other hand, the XO tablet could be dirt cheap. When Marvell announced the Moby reference design earlier this year, the goal was to develop a platform for $99 tablets. So while the original OLPC $100 laptop never quite reached its target price, maybe the $100 tablet will become a reality?