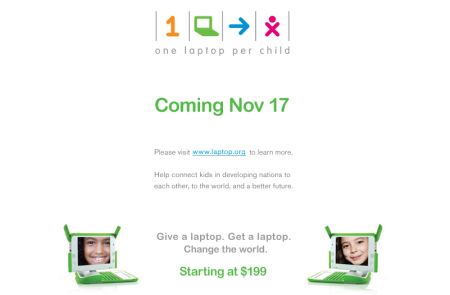 If you’ve been waiting all year to get your hands on an XO laptop, the wait is almost over. On Monday, the OLPC foundation is bringing back its buy one, give one program, this time with the help of Amazon. For about $400, you’ll be able to pick up an XO laptop for yourself, and the foundation will donate one to a child in a developing country.

Last year the OLPC foundation ran a similar program in the US just before the holidays. This year the group is expanding its efforts to cover Europe. The price will be pretty much the same in Europe as it is in the US, at about £268 or €313, which is just under $400 given today’s exchange rate.

Although the group behind the XO laptop has managed to shoehorn Windows XP onto an SD card for some customers, the version you’ll be able to pick up from Amazon will run Linux and a custom Sugar OS user interface. So this is pretty much exactly the same hardware that was available last year. But since it’s only available to the general public for a few months out of the year, there might still be some demand for it. Personally, I’m much more excited about the next generation OLPC XO-2, but that computer isn’t expected to be out until 2010.

One reply on “OLPC Give One, Get One program starts Monday in US, Europe”