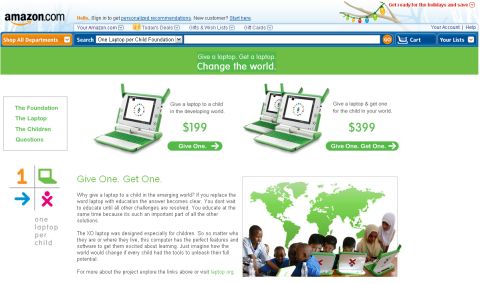 For the second year in a row, the One Laptop Per Child folks decided to offer up the innovative mini-laptop to consumers during the 2008 holiday season. Customers in a number of countries were able to purchase an XO laptop for themselves for about $400, with half the money going to donate an XO to a child in a developing nation. The group funded a massive advertising campaign to promote the Give 1, Get 1 program and partnered with Amazon to sell the computers.

But while 160,000 XO laptops were donated in 2007, OLPC founder Nicholas Negroponte tells Laptop magazine that only about 12,000 donations were made in 2008.

This probably shouldn’t be a huge surprise. In 2007 the XO Laptop was new and innovative and there was almost nothing like it on the market. While the XO still stands out from the crowd due to its spectacular high resolution, low power, readable-in-sunlight screen, there are dozens if not hundreds of different cheap netbooks available to consumers today. Customers who really wanted an XO probably jumped on the bandwagon early and picked them up in 2007. And folks who wanted a cheap netbook capable of running Windows, Linux, or other operating systems had a wide selection of computers to choose from this year – and millions of people had already purchased netbooks in 2008 long before the seasonal Give 1, Get 1 program started up again.

Negroponte does say that the “Give 1” only program, which lets people donate a computer for $199 without getting one for themselves did see a bit more success than the Give 1, Get 1 program this year.

3 replies on “OLPC flop: Almost nobody gives one or gets one this year”