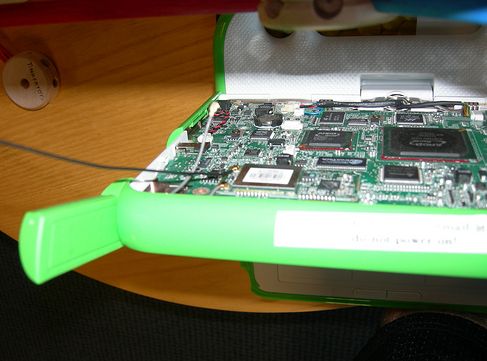 The folks at the OLPC Foundation have announced a major change in the XO Laptop hardware. The XO 1.5 will look almost identical to the original XO Laptop. But instead of using an AMD Geode low power processor, it will sport a VIA C7-M CPU. Last month there was a rumor going around that OLPC was going to drop the AMD chip and switch to an ARM processor. It looks like the only the first half of that rumor was true.

The team is still working on the XO-2, which will be a dual touchscreen device unlike pretty much anything available today, that laptop wont’ be available for a few years.

In the meantime, the XO 1.5 will be a faster, and more powerful machine than the original XO. In addition to the CPU change, the updated laptop will have 1GB of RAM (instead of 512MB) and 4GB to 8GB of NAND flash storage. The VIA C7-M CPU will run at clock speeds between 400MHz and 1.5GHz. The laptop will use the new VX855 chipset which incorporates a 3D graphics engine, HD video decorder, USB hub and other elements on a single chip.

The XO 1.5 will use the same display that’s found on first generation XO Laptops, but OLPC is working with PixelQi, a company founded by former OLPC designer Mary Lou Jepsen, on new screen technology that will be more vivid while consuming less power.

The VIA C7-M CPU is a 4 or 5 year old chip that’s also used in several consumer oriented netbooks, including the HP Mini 2133. I’ve found that it doesn’t handle multi-tasking, video, or other CPU-intensives tasks quite as well as the Intel Atom processor. But the C7-M chip offers decent performance with low power consumption and a low price tag. And it should offer a bit of a performance boost over the 433 AMD Geode processor used in the first generation XO Laptop.

Early versions of the XO 1.5 should be available for driver development in May, with a larger number of prototypes expected by August. The goal is eventually to release the XO 1.5 intonew markets as well as environments where the original XO has already been deployed, so the two laptops are designed to be interoperable.